According to an Ohio Dept. of Natural Resources investigation, the men cheated while competing at the Lake Erie Walleye Trail Tournament on Sept. 30. 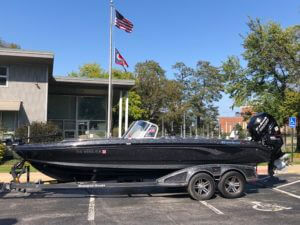 Had Runyan and Cominsky won the tournament, they would have received a total prize of $28,760, a media release states.

At the end of the tournament, the director noticed that the duo walleyes weighed more than they looked and sliced the fish open, according to the investigation.

The investigation revealed that 10 weights were found inside the walleyes, with eight weighing 12 ounces and two weighing eight ounces, along with several walleye filets.

The pair were immediately disqualified and asked to leave the tournament.

Each is charged with cheating, attempted grand theft, possessing criminal tools and unlawful ownership of wild animals, according to prosecutors.

Three of the charges are fifth-degree felonies, while unlawful ownership of wild animals is a fourth-degree misdemeanor.

“I take all crime very seriously, and I believe what these two individuals attempted to do was not only dishonorable but also criminal”, said prosecutor Michael C. O’Malley. “I would like to formally thank the officers with the Ohio Department of Natural Resources, the Hermitage Pennsylvania Police Department, the Mercer County District Attorney’s Office, and the Pennsylvania Fish and Boat Commission for their quick actions and their execution of a search warrant resulting in the seizure of criminal tools, including Defendant Cominsky’s boat and trailer.”

As part of the possessing criminal tools charge, a boat belonging to Cominsky was seized on Tuesday from Mercer County, Pennslyvania, along with a trailer, as evidence.

The unlawful ownership of wild animals pertains to the fish filets found on their boat, and a conviction for that charge could result in the indefinite suspension of their fishing licenses, the news release states.

Cominsky and Runyan will be arraigned at a later date.

This story was originally published Oct. 12 by WEWS in Cleveland, an E.W. Scripps Company.