FORT WORTH, Texas (AP) — A former Los Angeles Angels employee was convicted Thursday of providing Angels pitcher Tyler Skaggs the drugs that led to his overdose death in Texas.

Eric Kay, 47, was convicted on one count each of drug distribution resulting in death and drug conspiracy. He faces at least 20 years and up to life in prison when he is sentenced on June 28. 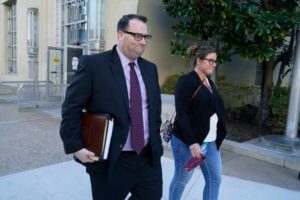 FILE – Former Los Angeles Angels employee Eric Kay, left, walks out of a federal court building where he is on trial for federal drug distribution and conspiracy charges in Fort Worth, Texas, Feb. 15, 2022. Kay was convicted Thursday, Feb. 17, 2022, of providing Angels pitcher Tyler Skaggs the drugs that led to his overdose death in Texas. (AP Photo/LM Otero, File)

Skaggs’ widow, Carli, and his mother, Debbie Hetman, hugged as the verdict was announced. Kay took off his jacket and tie and was placed into handcuffs, nodding toward his family and friends in the courtroom.

A 10-woman, two-man jury revealed the verdict after deliberating for no more than three hours following an eight-day trial. Kay was tried in federal court in Fort Worth, about 15 miles from where the Angels were supposed to open a four-game series against the Texas Rangers on July 1, 2019, the day Skaggs was found dead in a suburban Dallas hotel room.

“We’re obviously disappointed in the verdict. We thought there were many reasons to doubt the government’s case,” said Reagan Wynn, one of Kay’s attorneys. “This is a tragedy all the way around. Eric Kay is getting ready to do minimum 20 years in a federal penitentiary and it goes up from there. And Tyler Skaggs is gone.”

A coroner’s report said Skaggs, 27, had choked to death on his vomit, and a toxic mix of alcohol, fentanyl and oxycodone was in his system.

“This case is a sober reminder: Fentanyl kills. Anyone who deals fentanyl — whether on the streets or out of a world-famous baseball stadium — puts his or her buyers at risk. No one is immune from this deadly drug,” U.S. Attorney Chad E. Meacham said in a statement.

The trial included testimony from five major league players who said they received oxycodone pills from Kay at various times from 2017-19, the years Kay was accused of obtaining pills and giving them to players at Angel Stadium. Kay also used drugs himself, according to testimony and court documents.

Pitcher Matt Harvey, who rose to stardom with the New York Mets nearly a decade ago, said he knew he was threatening his career by admitting to cocaine use in New York and California.

Harvey, one of the players who said he received oxycodone pills from Kay but also obtained them for Skaggs in 2019, said he was subpoenaed and testified only because he was granted immunity from prosecution. Harvey is unsigned after pitching for Baltimore last season.

“The players’ testimony was incredibly difficult for our organization to hear, and it is a reminder that too often drug use and addiction are hidden away,” Angels president John Carpino said in a statement released by the team after the verdict. “From the moment we learned of Tyler’s death, our focus has been to fully understand the circumstances that led to this tragedy.” 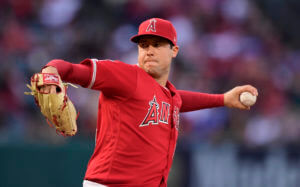 FILE – Los Angeles Angels starting pitcher Tyler Skaggs throws during the first inning of a baseball game against the Texas Rangers in Anaheim, Calif., May 25, 2019. A former Angels employee was convicted Thursday, Feb. 17, 2022, of providing Skaggs the drugs that led to his overdose death in Texas. (AP Photo/Mark J. Terrill, File)

The Skaggs family has filed wrongful death lawsuits in Texas and California against the Angels, who have said they weren’t aware of any employees providing opioids to players, or that Skaggs was using them.

In closing arguments, lead prosecutor Lindsey Beran said the government proved that Kay was the only one who could have given Skaggs the drugs that led to his death, that the delivery was in Texas and that fentanyl was the cause of death. The government argued Kay gave Skaggs counterfeit oxycodone pills that contained fentanyl.

Beran reminded jurors of the testimony of Harvey and fellow major league pitchers Cam Bedrosian and Blake Parker saying Skaggs’ death scared them away from using oxycodone. Harvey testified the painkiller was commonly used in a league where players often face surgeries and deal with injuries.

“Blake Parker, ‘I had a flashback to 2017 and I thought it could have been me,’” Beran told the jury, quoting the pitcher. “All of those people were one pill away from dying alone in a hotel room from a drug that Eric Kay gave them.”

Lead defense attorney Michael Molfetta said prosecutors didn’t prove Kay gave Skaggs the drugs after the team landed in Texas on a flight from California, or that fentanyl was the sole cause.

Molfetta pointed to a white board prosecutors said made their case. It was filled with magnetic tiles showing text messages between Skaggs and Kay, and departure and arrival times along with other elements from June 30 and July 1.

“Those tiles, these things they’ve put up there, they prove nothing but what’s on the tiles,” Molfetta told the jury. “There are so many assumptions behind it.”

Molfetta declined to speak to reporters after the verdict.

Kay served as the team’s public relations contact on many road trips, and the trip to Texas was his first since returning from rehab. Kay was placed on leave shortly after Skaggs’ death and never returned to the team. He didn’t testify.

Defense attorneys acknowledged Kay lied to police the day Skaggs was found dead by saying he hadn’t seen him the previous night. One of his colleagues at the time, current Angels director of communications Adam Chodzko, said Kay confided in him a couple of weeks later that he had been in Skaggs’ hotel room. Chodzko testified that Kay told him he didn’t give Skaggs pills that night and declined an offer from Skaggs to do drugs in the room. 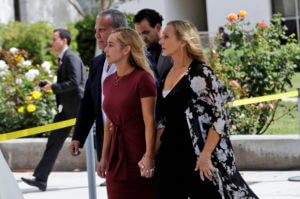 Carli Skaggs testified she didn’t know the extent of her husband’s drug use, and would have tried to do something about it if she had.

Hetman testified her son had issues with Percocet, a combination of oxycodone and acetaminophen, in 2013 but that he quit “cold turkey” at the time.

Garet Ramos, Skaggs’ stepbrother, testified he couldn’t remember the details of trying to help wean Skaggs off Percocet nine years ago and denied deleting text messages from his phone at the police department in Southlake, the suburb where Skaggs was found dead.

The medical examiner who conducted the autopsy testified there was a “greater probability” that fentanyl, which is significantly more potent than oxycodone, caused Skaggs’ death. Dr. Marc Krouse also said there was a “reduced probability” that alcohol and oxycodone caused the death. An expert for the government said it was a near-certainty fentanyl led to Skaggs’ death.