LAS VEGAS (KTNV) — Kelsey Turner is back in Las Vegas, according to an inmate search of Clark County Detention Center. She was booked on a charge of open murder with a deadly weapon.

ORIGINAL STORY 7/3/2019 LAS VEGAS (AP) — Prosecutors have decided they won’t seek the death penalty for a former Maxim and Playboy Italia model and her boyfriend in the killing of a 71-year-old California psychiatrist in Las Vegas. 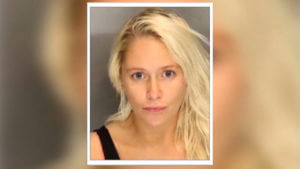 Kelsey Nichole Turner and Jon Logan Kennison have pleaded not guilty in the March death of 71-year-old Dr. Thomas Burchard of Salinas, California.

Police say Burchard had an intimate relationship with Turner and rented a Las Vegas home where Turner, Kennison and a housemate, Diana Pena, lived.

Burchard’s bludgeoned body was found March 7 in the trunk of Turner‘s car in the desert outside Las Vegas.

Pena has pleaded guilty to accessory to murder and implicated Turner and Kennison in Burchard’s death.