GRENOBLE, France (AP) — It started with the disappearance of 8-year-old Maëlys de Araujo at a wedding in the French Alps. After a massive search that drew nationwide attention, investigators identified a wedding guest as the main suspect. But that was just the beginning: The investigation led authorities to suspect the man in other crimes around France.

Dog trainer Nordahl Lelandais goes on trial Monday in Grenoble accused of kidnapping and killing Maëlys. He faces up to life in prison if convicted.

The search for Maëlys, and the gruesome discovery of her body six months later after Lelandais admitted to killing her, gripped France and tore the girl’s family apart. 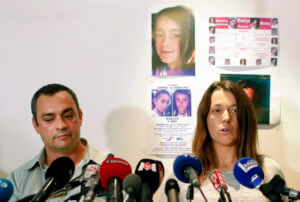 FILE – The father of killed girl, Maelys, Joachim de Araujo, left, and his wife, Jennifer, hold a press conference in Lyon, central France, Sept.28 2017. Nordahl Lelandais, goes on trial Monday Jan.31, 2022 in Grenoble accused of kidnapping and killing Maëlys, as well as for sexual violence against two of his cousins, age 5 and 6, and possession of pedophile images. He faces up to life in prison if convicted. (AP Photo/Laurent Cipriani, File)

Lelandais had not originally been invited to the wedding on Aug. 26, 2017, in the town of Pont-de-Beauvoisin. But he had phoned the groom the day before, who said Lelandais could come to the reception.

Lelandais showed up around midnight for dessert — and to provide cocaine to two guests who had asked him for it, according to witness accounts seen by The Associated Press.

He invited Maëlys to see his dogs, so she got in his car to look at them, according to investigators. Around 3 a.m., the girl’s mother alerted wedding guests that she was missing, and they started searching for her in vain.

Investigation of the suspect’s phone found that he put it on “airplane mode” twice that night. His car, an Audi A3, was spotted by a video surveillance camera at 2:47 a.m. with a small passenger, according to the investigation documents.

Lelandais then returned to the wedding, seemingly unconcerned about Maëlys while everyone else was looking for her, according to witness accounts. He left the wedding before the police arrived at 4:15 a.m.

He was identified as a suspect within days. For the next six months, he denied any involvement in the disappearance of Maëlys despite evidence accumulating against him.

Then in February 2018, after a trace of blood was discovered in the trunk of his car thanks to extensive scientific analysis, Lelandais confessed to investigators: “This poor little girl, I killed her involuntarily,” he said, apologizing to the parents, according to investigators. He told police where to find her body, and they dug up the child’s small bones in a forest.

Lelandais told investigators that Maëlys started crying in an “incomprehensible” way and that he punched her several times violently in the face, without intending to kill her.

“I don’t know what happened in my head,” he said.

In recalling the killing, he made a reference to another man, Arthur Noyer, a soldier who had disappeared earlier in 2017 from a gay nightclub in another region of the Alps. That prompted investigators to take a new look at Noyer’s disappearance. His skull was later found nearby.

Lelandais acknowledged accidentally killing Noyer after getting in a fight with violent blows. Last year, Lelandais was convicted and sentenced to 20 years in prison for Noyer’s murder.

Lelandais told investigators of his sexual attraction for little girls. He described being ashamed of this, and acknowledged heavy use of alcohol and drugs.

In the Grenoble trial, Lelandais will also be tried for sexual violence against two cousins, aged 5 and 6, committed the same summer of 2017 while he was on vacation in southern France.

He confessed to abusing them while they slept. A video of one of the scenes was found on his phone.

Lelandais was also indicted in the Ardennes in northern France for sexually assaulting a 14-year-old cousin. And police have studied whether Lelandais could have played a role in other unsolved crimes around France.

In “Maëlys,” a book written by the girl’s mother, Jennifer De Araujo, with a journalist, she calls the accused “the other” and recounts her family’s life since the disappearance.

She looks back on the six months of waiting, “hoping,” “going crazy”, receiving scattered leads — and then a feeling of “dying” when the examining magistrate announced “a drop of blood found in the trunk.” The parents separated, and sold their house.

The verdict in the trial over the girl’s murder is expected on Feb. 18.