Federal lawmakers are introducing a new bill called the FREE Act to protect Americans whose rights have been stripped away under guardianship. The court-appointed guardian (called a conservator in some states) can control every aspect of a person’s life including their finances, where they live, and who they associate with or even communicate with. They also lose the right to vote.

The WFTS I-Team has been exposing issues with guardianship abuse in Florida for the past eight years.

The proposed law would, for the first time, provide federal protection for people under guardianship.

“It’s a right versus wrong issue” 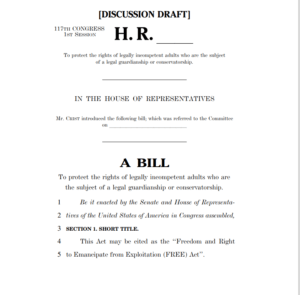 The proposed law would allow people in guardianships and conservatorships to petition a court to replace private or professional guardians with public guardians.

Public guardians are paid by taxpayers and would have no financial incentive to exploit people under their care.

“After your great reporting, and thank you for that, the incidents of how often this is happening in Florida is very troubling,” Crist said at the time.

But that legislation was stuck in committee, as Congress turned its attention to COVID and the economic downturn.

New attention on the Britney Spears case is now opening the nation’s eyes.

“I think the timing is a big factor,” Crist said. “It has brought so much more light to what millions of people experience across the United States every day with a conservatorship or guardianship.”

The new law would also appoint independent monitors in guardianship and conservatorship cases and would require states to file annual reports with the courts.

Crist is asking for $260 million to fund the reforms.

Congressman Crist believes the bill has strong bipartisan support and could be voted into law within the coming months.

This story was originally published July 20, 2021 by WFTS in Tampa Bay.