HOUSTON (AP) — Hundreds of mourners packed a Houston church Tuesday for the funeral of George Floyd, capping six days of mourning for the black man whose death has led to a global reckoning over police brutality and racial injustice.

Floyd, 46, was to be laid to rest next to his mother in the suburb of Pearland. He called out for her as a white Minneapolis police officer pressed a knee on his neck May 25. Cellphone video of the encounter ignited protests and scattered violence in cities across the U.S. and around the world. 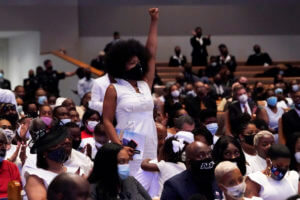 While the service was private, at least 50 people gathered outside the Fountain of Praise church to pay their respects. Some held signs with messages including “Black Lives Matter” and “Together because of George Floyd.”

“There’s a real big change going on and everybody, especially black, right now should be a part of that,” said Kersey Biagase, who traveled more than three hours from Port Barre, Louisiana, with his girlfriend, Brandi Pickney.

The couple wore matching T-shirts she designed, printed with Floyd’s name and “I Can’t Breathe,” the words he uttered before his death.

Several police officers from Texas Southern University stood guard at the sanctuary entrance, wearing face masks printed with Floyd’s dying words. The historically black school is next to the Houston housing project where Floyd grew up.

Mourners including Reps. Sheila Jackson Lee and Al Green, both Democrats from the Houston area, and the city’s police chief, Art Acevedo, filed in. Nearly all the pews were full, with relatively little space between people.

“So much for social distancing today,” the Rev. Remus Wright told mourners, gently but firmly instructing those attending to don face masks because of the coronavirus.

Many people fanned themselves with paper fans bearing an image of Floyd. 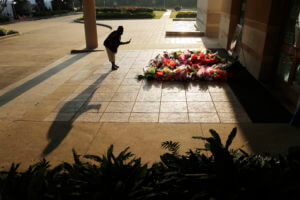 A woman stops to photograph a memorial for George Floyd at The Fountain of Praise church in Houston, Tuesday, June 9, 2020, in Houston. (AP Photo/Eric Gay)

Dozens of Floyd’s family members, most dressed in white, were led into the sanctuary by the Rev. Al Sharpton, the civil rights activist. They were joined by rapper Trae tha Truth, who helped organize a march last week in Houston attended by 60,000 people.

Floyd “often spoke about being world famous one day and he has managed to make that happen in his death,” the funeral program said.

The funeral came a day after about 6,000 people attended a public memorial, also in Houston, waiting for hours under a baking sun to pay their respects to Floyd, whose body lay in an open gold-colored casket.

Over the past six days, memorials for Floyd were also held in Minneapolis, where he lived in recent years, and Raeford, North Carolina, near where he was born. 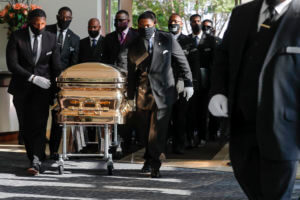 Pallbearers bring the coffin into The Fountain of Praise church in Houston for the funeral for George Floyd on Tuesday, June 9, 2020. Floyd died after being restrained by Minneapolis Police officers on May 25. (Godofredo A. Vásquez/Houston Chronicle via AP, Pool)

The services have drawn the families of other black victims whose names have become part of the debate over race and justice — among them, Eric Garner, Michael Brown, Ahmaud Arbery and Trayvon Martin.

Floyd’s death drew new attention to the treatment of African Americans in the U.S. by police and the criminal justice system.

In the past two weeks, sweeping and previously unthinkable things have taken place: Confederate statues have been toppled, and many cities are debating overhauling, dismantling or cutting funding for police departments. Authorities in some places have barred police from using chokeholds or are otherwise rethinking policies on the use of force.

Floyd, a bouncer who had lost his job because of the coronavirus outbreak, was seized by police after being accused of passing a counterfeit $20 bill at a convenience store. He was pinned to the pavement for what prosecutors say was 8 minutes, 46 seconds — a number that has since become a rallying cry among protesters.

Four Minneapolis officers were arrested in his death: Derek Chauvin, 44, was charged with second-degree murder. J. Alexander Kueng, Thomas Lane and Tou Thao were charged with aiding and abetting. All four could get up to 40 years in prison.

Some of the mostly peaceful demonstrations that erupted after Floyd’s death were marked by bursts of arson, assaults, vandalism and smash-and-grab raids on businesses, with more than 10,000 people arrested. But protests in recent days have been overwhelmingly peaceful. 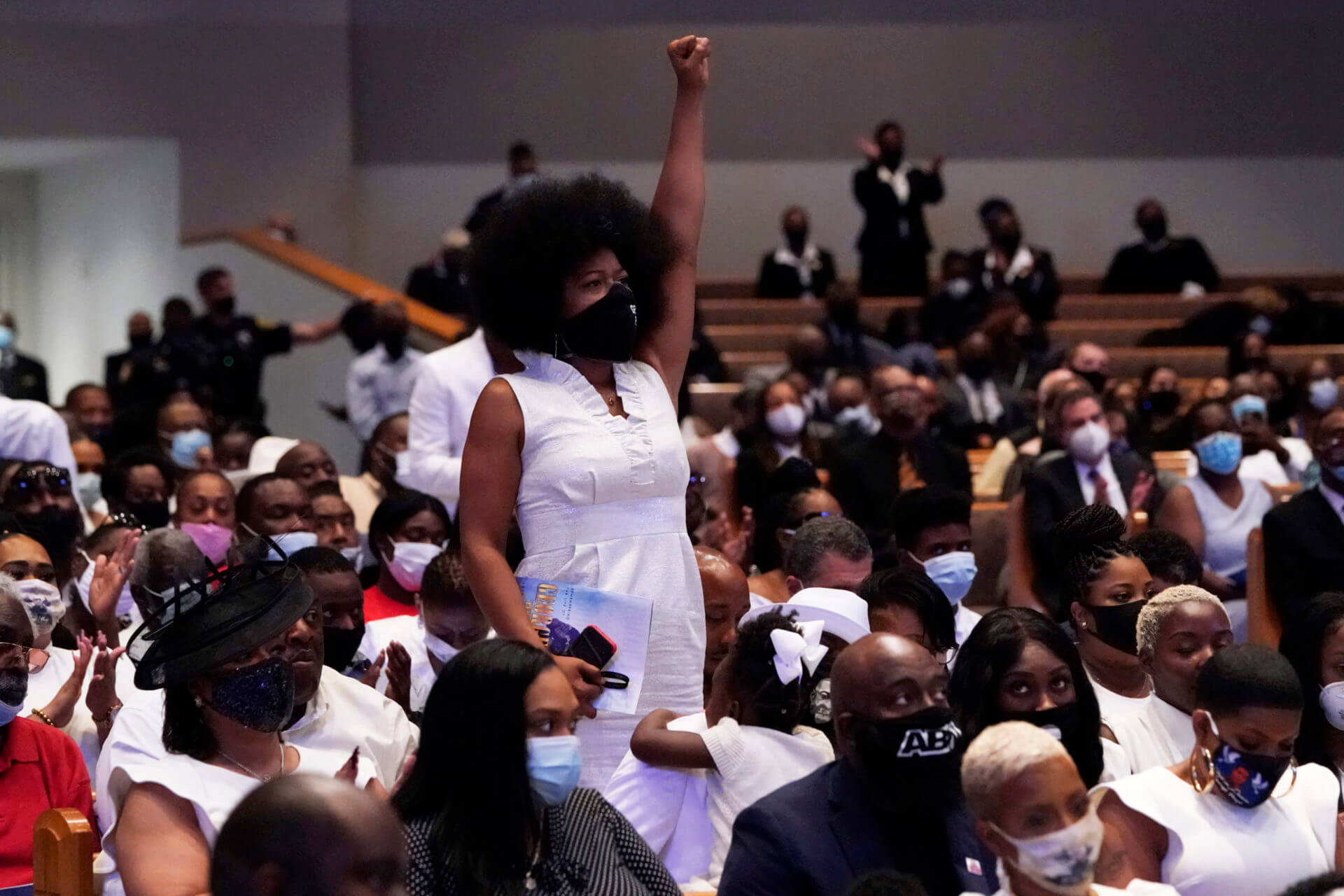