MARIETTA, Ga. (AP) — A Cobb County grand jury has indicted a man in the alleged killings of his new neighbors — a firefighter and his wife — and with cruelty to the slain couple’s toddler, who he allegedly left alone in the home for hours after the murders, news outlets reported.

Matthew Lanz, 22, of Acworth, is also accused of stabbing and wounding a police officer in neighboring Fulton County in November, two days after the alleged murders. Court records in Fulton County show the case is still pending, the Atlanta Journal Constitution reported. 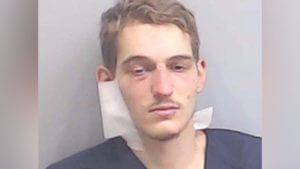 Lanz’s 27-year-old brother, Austin William Lanz, was identified as the man who fatally stabbed a Pentagon police officer and shot himself with the officer’s gun last August, the newspaper reported.

Austin Lanz was arrested in April 2021 in connection with a break-in at a home that shares a back fence with his. The home was sold a few months later to Cherokee County firefighter Timothy Justin Hicks and Amber Hicks, both 31.

The homeowner at the time of the break-in, Phillip Brent, has told The Associated Press it was a culmination of a long harassment campaign against Brent and his then-fiancée.

In the 13-count indictment Thursday, Matthew Lanz was charged with malice murder — killing with the intent to do so — of the Hickses on Nov. 17. Their bodies were found in their home the following day.

The indictment accuses him of causing their 2-year-old son physical and mental pain because the child was alone for 12 hours, “unable to feed himself, change his diaper, or get the attention of his parents.” When police found the child, he was physically unharmed, WAGA-TV reported.

Matthew Lanz is jailed without bond in Fulton County, where he was arrested Nov. 19 in the stabbing of a Sandy Springs police officer who responded to a burglary report. Investigators say other officers shot at Lanz, hitting him twice. The officer who was stabbed has since recovered and returned to duty, WSB-TV reported.

Charges in Cobb County include tampering with evidence for allegedly removing shell casings from the murder scene, WAGA-TV reported.