Since 1863, Georgia’s written law has allowed a private citizen to make an arrest if a crime is committed in the person’s presence “or within their immediate knowledge.” 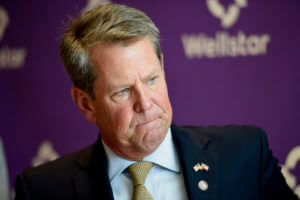 Advocates say the law is steeped in racism and slavery, and was used to round up suspected escaped slaves and then as a justification for the lynching of African Americans.

Kemp, a Republican, said the February 2020 killing of Arbery near Brunswick shows that the law needs to change.

One prosecutor who examined the case ruled that there wasn’t probable cause to arrest Travis McMichael and Greg McMichael, later charged with murder in Arbery’s shooting death, because the McMichaels believed Arbery had committed a crime and were attempting a citizen’s arrest. Prosecutors say Arbery was merely jogging when the McMichaels pursued him.

“Some tried to justify the actions of the killers by claiming they had protection under an antiquated law that is ripe for abuse,” Kemp said. “That is why today my administration is introducing significant reforms to our state citizen’s arrest statute to close dangerous loopholes that could be used to justify future acts of vigilantism.”

A number of Democrats, as well as the Georgia NAACP and Southern Center for Human Rights say they support the plan. That could signal bipartisan support and swift passage for the bill, less than a year after Arbery’s killing also motivated Georgia lawmakers to revive a hate crimes law after a previous Georgia law was struck down years earlier.

Rep. Carl Gilliard, a Democrat from Garden City who was an early proponent of the repealing the law, said ending it would strike at the racist roots of a measure codified by a Georgia slaveholder who died fighting for the Confederacy. He said it would be a fitting tribute to Arbery a year after his death.

“I think it sends a message not only to his family, but all those who cry justice,” Gilliard said, alluding to nationwide protests after the death of George Floyd in Minneapolis that also took up Arbery’s cause after a video showing his death was released.

L. Chris Stewart, a lawyer who represents Arbery’s mother, said during a news conference Tuesday that he supports changing the law. 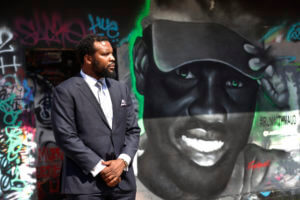 Lee Merritt, a lawyer representing the family of Ahmaud Arbery, poses for a photo by a mural in the likeness of Arbery painted by artist Theo Ponchaveli in Dallas, Saturday, May 9, 2020.  (AP Photo/Tony Gutierrez)

If a police officer or sheriff’s deputy doesn’t arrive within an hour, someone who is detained must be released along with their personal belongings.

The law also clarifies that police officers can still arrest people outside their jurisdictions.

People who are just bystanders or witnesses generally would not have the right to detain people. Deadly force couldn’t be used to detain someone unless it’s in self-protection, protecting a home, or preventing a forcible felony. The changes would retain Georgia’s “stand your ground” law that says a person isn’t required to retreat.

Rep. Calvin Smyre, a Columbus Democrat who was at the center of talks last year over the hate crimes law, said changing citizen’s arrest “bubbled up” frequently in those negotiations, and said it would have been “an abdication of our responsibility” to not come back this year and address it. He acknowledged that most Democrats are still unhappy with Georgia’s “stand your ground” law, but indicated compromise is necessary in the state’s Republican-dominated General Assembly.