ATHENS, Greece (AP) — A painting donated to Greece by Pablo Picasso will go back on display at the newly renovated National Gallery in Athens following its recovery more than nine years after it was stolen and the arrest of a 49-year-old construction worker as a suspect.
Authorities said Tuesday that Picasso’s “Woman’s Head” and a work by the Dutch master Piet Mondrian, “Stammer Mill with Summer House,” were stolen in January 2012 from the National Gallery in Athens. 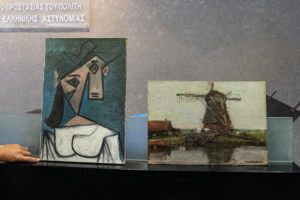 A cubist female bust by the Spanish painter Picasso, left, and a 1905 representational oil painting of a riverside windmill by the Dutch painter Mondrian are displayed by police officers, in Athens during a press conference, on Tuesday, June 29, 2021. Greek police says they have recovered two paintings by 20th century masters Pablo Picasso and Piet Mondrian, nearly a decade after their theft from the country’s biggest state art gallery in Athens. (AP Photo/Petros Giannakouris)

They were recovered, wrapped in plastic sheets and hidden in a dry river bed outside Athens after the suspect was detained for questioning.
The Picasso work of a female in cubist style was donated to Greece in 1949 with a dedication “in homage to the Greek people” for their resistance against the German-led occupation in World War II.

“This painting is of special importance and emotional value as the great painter personally dedicated it to the Greek people for their struggle against fascist and Nazi (occupying) forces and bears his hand-written dedication,” Culture Minister Lina Mendoni said.

“That is why this painting was impossible not only to sell but even to put on display as it would be immediately identified as being stolen from the National Gallery.” The National Gallery was recently reopened after a major renovation that lasted nine years and was delayed for months due to the pandemic. Mendoni did not say when the recovered works would go back on display.

The suspect is a Greek man who is believed to have acted alone, police said. They were investigating his claim that a third stolen work, a drawing of a religious scene by Italian 16th-century painter Guglielmo Caccia, was damaged and discarded shortly after the 2012 break in.
Police did not give details on how the suspect and paintings were located, but noted that they had been moved to the dry river bed recently, apparently following reports in the Greek news media that authorities were close to making an arrest.

“Recovering the works of Picasso and Mondrian is a major success,” Public Order Minister Michalis Chrisochoidis said. “The police worked systematically, in a collaborative and creative way, and they should be commended for that. At the new National Gallery, the (paintings) will be given the place they deserve.”