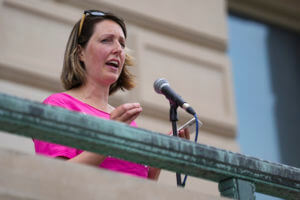 FILE – Dr. Caitlin Bernard, a reproductive healthcare provider, speaks during an abortion rights rally on June 25, 2022, at the Indiana Statehouse in Indianapolis. Todd Rokita, Indiana’s Republican attorney general, on Wednesday, Nov. 30, asked the state medical licensing to discipline Bernard, an Indianapolis doctor who has spoken publicly about providing an abortion to a 10-year-old rape victim who traveled from Ohio after its more-restrictive abortion law took effect. (Jenna Watson/The Indianapolis Star via AP, File)

An attempt to block a probe by Attorney General Todd Rokita’s office was rejected by Marion County Judge Heather Welch. She also ruled Friday in a separate lawsuit that Indiana’s abortion ban adopted in August violates the state’s religious freedom law signed by then-Gov. Mike Pence in 2015. The Indiana abortion ban, however, has been on hold since mid-September as courts consider a challenge from abortion clinic operators who argue the ban violates the state constitution.

The judge’s ruling on the investigation into Dr. Caitlin Bernard came two days after the attorney general’s office asked the state medical licensing board to discipline Bernard, alleging she violated state law by not reporting the girl’s child abuse to Indiana authorities and broke patient privacy laws by telling a newspaper reporter about the girl’s treatment.

That account sparked a national political uproar in the weeks after the U.S. Supreme Court overturned Roe v. Wade in June, with some news outlets and Republican politicians suggesting Bernard fabricated the story. The girl had been unable to get an abortion in Ohio after a more restrictive abortion law took effect there.

Bernard filed a lawsuit against the state attorney general last month, arguing Rokita’s office was wrongly justifying the investigation with “frivolous” consumer complaints submitted by people with no personal knowledge about the girl’s treatment. Bernard and her lawyers maintain the girl’s abuse had already been reported to Ohio police before the doctor ever saw the child.

But the judge turned down Bernard’s request for an injunction to block the investigation. Welch ruled the medical licensing board now had jurisdiction over the matter since the attorney general filed the complaint on Wednesday. That complaint asked the state medical licensing board to impose “appropriate disciplinary action” without specifying a proposed penalty. The board, which has the authority to suspend, revoke or place on probation a doctor’s license, said Friday it had received the complaint but that no hearing date had been set. 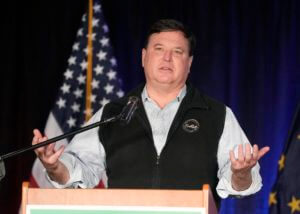 Welch, however, found that Rokita wrongly made public comments about investigating Bernard before the complaint was filed. Welch wrote that Rokita’s statements “are clearly unlawful breaches of the licensing investigations statute’s requirement that employees of the Attorney General’s Office maintain confidentiality over pending investigations until they are so referred to prosecution.”

Bernard’s lawyer, Kathleen DeLaney, criticized Rokita for violating his “duty of confidentiality” and preemptively pushing the case to the medical board, thus “taking it out of the hands of Judge Welch.”

“We are confident in the record and testimony that we have already developed and look forward to presenting Dr. Bernard’s evidence to the Medical Licensing Board,” DeLaney said.

“The doctor and her attorneys initiated this media frenzy from the beginning, and it continues to draw attention to this innocent little girl who is trying to cope with a horrific trauma,” the office said in a statement that did not address the judge’s criticism of Rokita’s public comments on the case.

Bernard provided abortion drugs to the girl in Indianapolis in late June, as she said doctors determined the girl was unable to have an abortion in neighboring Ohio. That’s because Ohio’s “fetal heartbeat” law took effect with the U.S. Supreme Court’s decision to end women’s constitutional protections for abortion. Such laws ban abortions from the time cardiac activity can be detected in an embryo, which is typically around the sixth week of pregnancy.

Rokita has kept the investigation going even after a 27-year-old man was charged in Columbus, Ohio, with raping the girl and public records obtained by The Associated Press show Bernard met Indiana’s required three-day reporting period for an abortion performed on a girl younger than 16.

In Welch’s ruling on the state’s abortion ban, the judge sided with five residents — who hold Jewish, Muslim and spiritual faiths — who argued that the ban would violate their religious rights on when they believe abortion is acceptable.

“The undisputed evidence establishes that the Plaintiffs do not share the State’s belief that life begins at fertilization or that abortion constitutes the intentional taking of a human life,” Welch wrote. “To the contrary, they have different religious beliefs about when life begins. … Under the law, the Court finds these are sincere religious beliefs.”

Rokita’s office, which has been defending the abortion ban in court, did not immediately comment on the religious freedom lawsuit ruling.