DES MOINES, Iowa (AP) — An Iowa man charged with taking part in the Jan. 6 insurrection at the U.S. Capitol has asked a judge not to send him back to jail even though he was caught violating the terms of his pretrial release by accessing the internet. 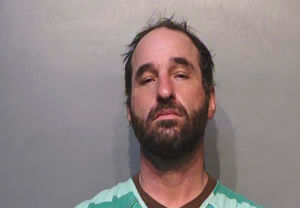 FILE – This undated photo provided by Polk County, Iowa Jail shows Douglas Jensen. A prosecutor says Jensen, a QAnon follower, seen in a videotaped confrontation with a police officer during the Capitol insurrection violated terms of his release by watching internet videos about the Jan. 6, 2021, attack and should be returned to custody until trial. (Polk County Jail via AP, File)

Douglas Jensen’s lawyer, Christopher Davis, wrote in a court filing Sunday that Jensen concedes that he violated the terms of his release by accessing a video-sharing website that features misinformation about COVID-19 vaccinations and the 2020 presidential election.

“Mr. Jensen knew that this was not allowed and is prepared to accept the consequences of his actions,” Davis wrote, though he told U.S. District Judge Timothy Kelly that Jensen had complied with all of the other terms of his release and asked him to give Jensen another chance.

“His violation, though a serious misplacement of this court’s trust, was not an action that in any way endangers the community,” he said. “Mr. Jensen asks this court to accept his apology and allow him to remain in home incarceration, with a sanction, if this court deems such is appropriate.”

Jensen was released in July after spending six months in jail. At the time, Jensen told the judge he had been duped by QAnon conspiracy theories, saying he “bought into a pack of lies” and had since experienced a “wake-up call.”

In releasing Jensen, Kelly clearly told him he could be returned to jail if he accessed the internet.

Phillips wrote that Jensen’s swift violation confirms what the government and the judge suspected all along: “that Jensen’s alleged disavowal of QAnon was just an act.”

Jensen, 41, faces charges including civil disorder and assaulting, resisting or impeding a law enforcement officer. In video of the insurrection, Jensen could be seen wearing a T-shirt bearing the letter “Q,” a symbol of the QAnon conspiracy theory, as he and other rioters followed Capitol police officer Eugene Goodman up two flights of stairs inside the building.

Davis said Jensen has a mental health evaluation scheduled for Friday and that his urge to access the internet likely will be a topic of discussion. He said Jensen did not post over social media and did not act on or encourage anyone to accept conspiracy theories.