CHICAGO (AP) — An Iowa man arrested by Chicago police for having guns and ammunition in his hotel room overlooking a Lake Michigan beach told officers he “didn’t mean to startle anyone” and simply forgot to remove the firearms from a bag while packing for a trip to the city, police video shows.

Keegan Casteel’s arrest for having a rifle with a laser sight and a handgun in his hotel room during the July Fourth holiday weekend prompted Mayor Lori Lightfoot and police Superintendent David Brown to suggest he may have intended to fire on Navy Pier crowds from his hotel window. 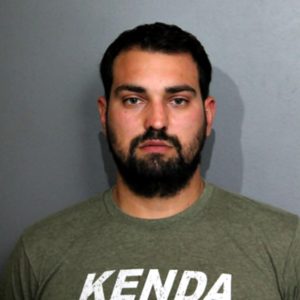 Casteel’s attorney has said those remarks were baseless and spurred sensational media coverage, while his client was in Chicago to propose to his girlfriend, not to launch a mass attack. He also suggested that the weapons made the Ankeny, Iowa, man feel safer in a crime-ridden city.

Casteel, 32, was charged with two felony counts of aggravated unlawful use of a weapon after a member of the cleaning staff at the W Hotel discovered the weapons and ammunition. Prosecutors have said a grand jury would review the case.

The weapons were found on the window sill of Casteel’s 12th floor hotel room with a view of Ohio Street Beach and Navy Pier, a major tourist attraction.

“Why didn’t you leave your firearms at home?” a responding officer asks Casteel in police footage.

Casteel replies that he forgot to remove all the firearms from his gun range bag because he packed in a rush after his son was injured and hospitalized the night before he left with his girlfriend and children for Chicago.

He said he removed the guns and ammunition from the bag and left them in the hotel room so that he could use the bag at the beach.

“I didn’t expect anything to happen. I just left them there for the day. Went to the beach. Came back. Went shopping,” Casteel tells officers, also adding that he planned to propose to his girlfriend.

“It’s my fault. I didn’t mean to startle anyone. I understand 100% why I’m here. But like I said, it’s an honest to God accident,” Casteel said.

Casteel was released on $10,000 bond after a judge reminded him that gun laws in Chicago are different than in Iowa. Once he was released from the police station, he proposed.