SALT LAKE CITY (AP) — Transgender kids in Utah will be not be subjected to sports participation limits at the start of the upcoming school year after a judge delayed the implementation of a statewide ban passed earlier this year.

Judge Keith Kelly’s decision Friday to put the law on hold until a legal challenges is resolved came after he recently rejected a request by Utah state attorneys to dismiss the case. Most Utah schools students head back to classes this month. 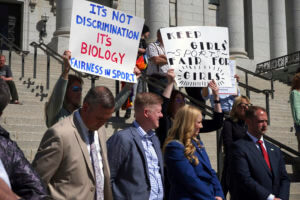 FILE – Lawmakers listen as parents speak about the prospect of their children competing against transgender girls in school sports at the Utah State Capitol on March 25, 2022, in Salt Lake City. A Utah high school athletics association secretly investigated a female athlete, without telling her or her parents, after receiving complaints from the parents of two girls she had defeated in competition questioning whether the girl was transgender. (AP Photo/Samuel Metz, File)

Attorneys representing the families of three transgender student-athletes filed the lawsuit challenging the ban last May, contending it violates the Utah Constitution’s guarantees of equal rights and due process.

Similar cases are underway in states such as Idaho, West Virginia and Indiana.

The issue of whether transgender girls should be allowed to participate in female sports has become flashpoint across the U.S. with Republican lawmakers passing legislation to block them based on the premise it gives them an unfair competitive advantage.

Transgender rights advocates counter that the rules aren’t just about sports, but another way to demean and attack transgender youth.

As of March, the Utah High School Activities Association knew of only one transgender girl playing in K-12 sports who would be affected by the ban.

The association, which organizes leagues for 85,000 students, has said there have been no publicly made allegations of competitive advantage concerning any of the state’s four transgender youth athletes.