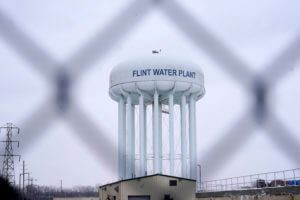 Kelly rejected efforts by the attorney general’s office to just send the cases to Flint District Court and turn them into criminal complaints, the typical path to filing felony charges in Michigan.

“Simply put, there are no valid charges,” Kelly said.

Kelly’s decision doesn’t affect former Gov. Rick Snyder. That’s only because he was charged with misdemeanors and his case is being handled by a judge in a different Flint court. But he, too, was indicted in a process declared invalid by the Supreme Court.

In 2014, Flint managers appointed by Snyder took the city out of a regional water system and began using the Flint River to save money while a new pipeline to Lake Huron was being built. But the river water wasn’t treated to reduce its corrosive qualities. Lead broke off from old pipes and contaminated the system for more than a year.

Separately, the water was blamed for an outbreak of Legionnaires’ disease, which typically spreads through heating and cooling systems.