LEXINGTON, Ky. (WLEX) — A University of Kentucky student arrested after an online video showed her calling another student racial slurs while verbally and physically assaulting her bonded out of jail earlier this evening. Sophia Rosing’s parents were present and covered her face as she left. 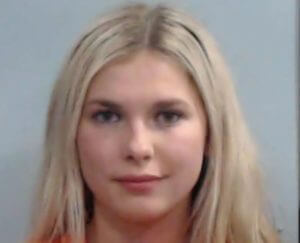 The video posted online showed the student employee, Kylah Spring, repeatedly being called racial slurs before campus police showed up and arrested the woman, later identified by the university as Rosing.

Spring was working an overnight shift at the front desk of the residence hall when she said she saw a drunk Rosing attempting to enter the building around 1:00 a.m. Sunday.

“She did not look like a resident, so I did not open the door but when she came in, she stumbled across the front desk over to the elevator and she started talking to the elevator,” Spring said in a TikTok video.

Spring said because of her job, when a student appears intoxicated, she is required to call a resident advisor (RA) so that they can check on the well-being of the person and write a report to document the situation.

While waiting for an RA to respond, Rosing allegedly became combative. That’s when she started calling Spring and other Black students the n-word and other offensive language. An officer arrested Rosing as she repeated it in front of the students.

UK student caught on video berating another student with racial slurs is out of jail. LEX18 INVESTIGATES was there as Sophia Rosing walked out of jail @LEX18News pic.twitter.com/wq5W9sygJu

According to Rosing’s arrest citation, she said that she has “lots of money” and gets “special treatment.” When an officer told her to sit back in a chair, she kicked the officer and bit his hand, according to the citation.

Rosing was booked in the Fayette County Detention Center and is facing several criminal charges, including two counts of assault, public intoxication, and disorderly conduct. 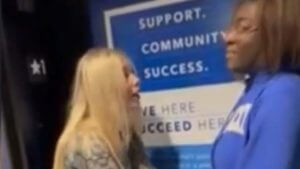 L to R: Sophia Rosing and Kylah Spring in a screengrab of the incident.

The video was initially posted to the social media app, TikTok, by the victim. It has since been deleted but has been reuploaded to other social media sites.

In a statement posted to Instagram, the University of Kentucky acknowledged the incident, calling it “disturbing.”

“The video is deeply offensive, and we take it very seriously,” the university said.

The university said they are conducting an immediate review and have reached out to the student victim to offer support.

“The safety and well-being of our students is our top priority, and we will not tolerate behavior that threatens it,” the university said. “As we learn more details, we will share that information.”

“To be clear: we condemn this behavior and will not tolerate it under any circumstance,” said Capilouto. “The safety and well-being of our community has been — and will continue to be — our top priority.”

UK student “Jane Doe” appeared in court via video conference. She was officially identified as Sophia Rosing. Her lawyer entered plea of not guilty and waived formal arraignment. Her bail was kept at 10K cash. @LEX18News pic.twitter.com/OGclvgu1Od

Rosing appeared in court Monday afternoon and pleaded not guilty through her lawyer and waived a formal arraignment.

Her parents were in attendance.

This story was originally published Nov. 7, 2022 by WLEX in Lexington, an E.W. Scripps Company.