FARMERVILLE, La. (AP) — A Louisiana grand jury began hearing evidence Monday in the deadly 2019 arrest of Ronald Greene, long-awaited testimony that will determine whether state charges are brought against the white troopers seen on body-camera video stunning, striking and dragging the Black motorist by his ankle shackles following a high-speed chase. 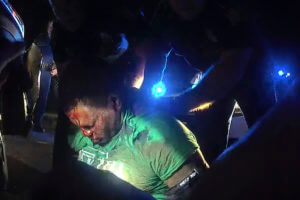 FILE – This image from video from Louisiana state police state trooper Dakota DeMoss’ body-worn camera, shows troopers holding up Ronald Greene before paramedics arrived on May 10, 2019, outside of Monroe, La. On Monday, Nov. 14, 2022, a Louisiana grand jury began hearing evidence in the deadly 2019 arrest of Greene, long-awaited testimony that will determine whether state charges are brought against the white troopers seen on body-camera video stunning, striking and dragging the Black motorist by his ankle shackles following a high-speed chase. (Louisiana State Police via AP, File)

Prosecutors planned to present a wide range of felony counts related to the troopers’ use of force and their decision to leave the heavyset Greene handcuffed and prone for several minutes before rendering aid. The panel is expected to hear from several witnesses before deciding on indictments in the coming weeks.

“I want justice to be done,” John Belton, the Union Parish district attorney, told The Associated Press. “I just feel like I need to do the right thing and present everything to the grand jury and have them determine which way this thing is going to go.”

The proceedings come three and a half years after Greene died in Louisiana State Police custody on a rural roadside outside Monroe. The state case was held up for months by an ongoing FBI investigation that expanded to include allegations of an attempted cover-up. Federal prosecutors asked Belton to hold off pursuing state charges before reversing course last spring and handing over a voluminous case file.

“The goalposts moved,” Belton said, adding he long expected the U.S. Justice Department to bring civil rights charges in the case. “I had to balance it because I promised the feds I wouldn’t pursue any charges pending their investigation — but I promised the family I’d seek justice.”

Authorities initially told Greene’s family he died in a crash following a lengthy police pursuit — a narrative the family rejected and that was questioned even by an emergency room doctor after Greene’s bruised and battered body arrived at the hospital. Still, a coroner’s report listed the cause of death as motor vehicle accident, while a state police crash report omitted any mention of troopers even using force in Greene’s arrest. And 462 days would pass before state police began an internal investigation into the troopers involved.

All the while, the body-camera footage remained so secret it was withheld from Greene’s initial autopsy. Gov. John Bel Edwards declined repeated requests to release the videos, citing the ongoing investigations, before AP published them. 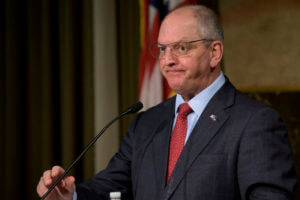 FILE – Louisiana Gov. John Bel Edwards speaks about the investigation into the death of Ronald Greene in Baton Rouge, La., Tuesday, Feb. 1, 2022. On Monday, Nov. 14, 2022, a Louisiana grand jury began hearing evidence in the deadly 2019 arrest of Ronald Greene, long-awaited testimony that will determine whether state charges are brought against the white troopers seen on body-camera video stunning, striking and dragging the Black motorist by his ankle shackles following a high-speed chase. (AP Photo/Matthew Hinton, File)

The Democratic governor has since described the troopers’ treatment of Greene as both criminal and racist. Monday, Edwards attended a groundbreaking ceremony for an infrastructure project rather than appear in Baton Rouge before a bipartisan legislative committee investigating Greene’s death.

The committee took a months-long hiatus in hearing testimony and waited until the day after last week’s election to invite the governor. The panel formed in February after AP reported Edwards had been informed within hours that troopers arresting Greene engaged in a “violent, lengthy struggle,” yet the governor stayed mostly silent on the case for two years, even as troopers continued to raise the car crash theory.

The state and federal investigations have been complicated by the untimely death of Chris Hollingsworth, a state trooper who admitted bashing Greene’s head with a flashlight and was recorded saying he “beat the ever-living f— out of” Greene. Hollingsworth was widely seen as the most culpable of the half-dozen officers involved but he died in a high-speed, single-vehicle crash just six days after he was interrogated about the violence he used taking Greene into custody.

Hollingsworth’s death was ruled accidental but prompted widespread speculation that the former state police driving instructor took his own life. His violent role in Greene’s arrest prompted prosecutors to explore the possibility of charging him posthumously.

Among the witnesses testifying to the grand jury is Albert Paxton, the now-retired lead detective on the Greene case who has said supervisors pressured him not to bring state charges in the case.

Another is a forensic pathologist who, tasked by the FBI to re-examine Greene’s autopsy, rejected the crash theory and attributed Greene’s death to “physical struggle,” troopers repeatedly stunning him, striking him in the head, restraining him at length and Greene’s use of cocaine.