COLUMBIA, S.C. (AP) — The last thing the family of two sisters slain in a tiny South Carolina town had heard about the man who confessed to killing them was that he was headed to a mental hospital in 2012 to be treated for schizophrenia so he could later be tried for murder. 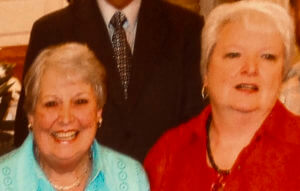 In this undated photo released by the Mitchum Family in May 2020 shows Thelma Haddock, left, and her sister, Naomi Johnson. Authorities said they were killed in Kingstree, S.C., in October 2010 and the man charged in their killing was sent for mental treatment and disappeared until the family saw him back in their small town in 2020 and realized his charges were gone. (Mitchum Family via AP)

For 10 years, they heard nothing. Then, a few months ago, friends started to call a son of one of the women with the news that they had seen Joseph Jermaine Brand around Kingstree, family attorney Lori Murray said.

Darren Tisdale, a son of the other sister and mayor of the town of 3,100, then began searching for Brand, spotting him just a couple of miles from where police said he confessed to shooting the two women in the head after breaking into their home in October 2010. Tisdale called prosecutors but got no answers.

“He executed two elderly women,” Murray said. “I can’t believe he isn’t a danger to the whole town just out walking around.”

Murray and the families of Naomi Johnson, 65, and her 74-year-old sister Thelma Haddock, gave the sparse court records they could find and other information to The Associated Press in advance of a news conference. Then they asked reporters for help.

“We need closure. I don’t know about you, but yesterday there was a big hole in my heart when I don’t have my mama on Mother’s Day,” Darren Tisdale said.

At the courthouse, a clerk said there was no record of Brand’s arrest or indictments for two counts of murder, armed robbery, first-degree burglary and a weapons charge. The records could not be found online either, although there were some court records still available in a file where the arrest warrants were kept. Other public records show Brand, 43, registered to vote from an assisted living home near Columbia in 2016. At one point, he also had a Facebook page.

That’s the only tangible piece of evidence about where Brand was until he showed up in Kingstree again. No one has given the family any explanation for why his charges just disappeared.

A judge’s order in 2012 said if Brand’s mental competency was restored, he was to be brought back to Williamsburg County and held without bond for his trial. Under the law, a prosecutor could seek 30 years to life in prison for Brand, with the possibility of a death penalty trial.

Prosecutors have promised to reinstate the charges and said they will ask a grand jury to indict Brand again at the end of the month, Murray said. Solicitor Chip Finney didn’t return a phone message or email from the AP. Neither did the assistant prosecutor who signed off on dropping the charges because of the competency problem or Brand’s public defender at the time.

A woman in Kingstree identifying herself as Brand’s grandmother hung up on an AP reporter Monday. No one responded to a message left at a telephone number listed for Brand’s mother. 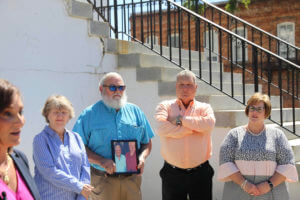 The families of two sisters killed in 2010 in Kingstree, S.C., stand by attorney Lori Murray, far left, who asks prosecutors to release information about why the man charged in the killings has been set free after being found incompetent to stand trial, at a news conference, Monday, May, 9, 2022, in Kingstree. (AP Photo/Jeffrey Collins)

Members of the sisters’ family said they had faith in the system, even when a call to Finney to check on the case in 2018 went unanswered. That was, until they saw Brand walking around free.

“It has been very hard on the whole family having to relive this event all over again,” the family said in a statement issued through their attorney. “We want justice for our mothers. We want closure for our families, we want Joseph Brand to pay for his crimes and we want answers as to how and why he was released without prosecution.”

Brand lived a few doors down from Johnson and Haddock in 2010. He had moved to Kingstree to live with his father after a stint in a Nevada prison on charges of robbery, drugs and firing a gun out of a vehicle, according to legal records.

Brand came over to the sisters’ house and asked to spread pine straw for money. When they refused, Brand barged into the home, wrested a gun away from one of the sisters and shot them several times, including in the head, Williamsburg County deputies said.

Brand’s father found him walking aimlessly in the sisters’ front yard, investigators said. The father saw their door was open and poked his head in to apologize. That’s when he discovered the bodies.

Brand confessed to the killings, according to arrest warrants. But the records show that his mental problems kept him from being able to assist his attorney, prompting a judge to order a psychiatric evaluation. A psychiatrist’s report stated that Brand had schizophrenia and his thinking was completely disorganized. The report indicated that Brand refused to take his medicine and that if he did take it, his competency could be restored.

When asked his age after his arrest, Brand responded, “Seventy-nine in Islam years.” Then he said he was 34. One of the two psychiatrists who examined him corrected him, saying court records listed him as being 33. “And a half!” Brand yelled back, according to the report on his mental state.

When asked how he hoped his case would turn out, Brand, who once lived in Reno, Nevada, said he wanted “to return back to the biggest little city.”

“I want to return back to life as a rock star,” he said, according to the report.

Brand was first sent for temporary psychiatric treatment, but remained incompetent to stand trial, according to Circuit Judge Clifton Newman, who in November 2012 ordered him to be confined until he was better. 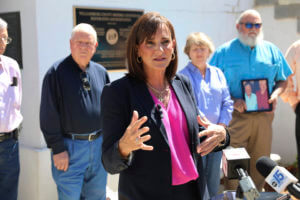 Attorney Lori Murray speaks at a news conference, Monday, May 9, 2022, in Kingstree, S.C. Murray asked prosecutors to release information about why the man charged in the killings of two sisters in October 2010 has been set free after being found incompetent to stand trial. (AP Photo/Jeffrey Collins)

That’s where the paperwork trail ends, aside from the record of his registering to vote from the assisted living home in Blythewood in 2016. No one quite knows how Brand ended up back in Kingstree last year.

Murray said even though the solicitor has promised to bring the case before a grand jury, she is concerned about whether that will actually happen because it isn’t clear whether Brand was declared mentally competent. She said she still can’t get answers from Finney’s office.

“The charges are gone. The record is expunged. Mr. Brand is walking around as free as a jaybird,” Murray said.

State mental health officials said privacy laws prevent them from releasing any details of Brand’s treatment. But in a statement Monday, the Department of Mental Health said patients charged with crimes who need long-term care are committed by a probate judge and both that judge and prosecutors are informed when the patient no longer needs involuntary treatment.

Finney’s office told the family that investigators have been keeping an eye on Brand since they realized he was back in Kingstree, but Murray said that is little comfort. She worries now he may run since he knows a grand jury is going to hear the case again at the end of the month.

“He’s still out there,” Murray said. “And I think if there wasn’t any problem with the case, they could have brought him back in.”