HOUSTON (AP) — A man was convicted of capital murder on Monday in the 2019 shooting death of a law enforcement officer who was the first Sikh deputy in his Texas agency. 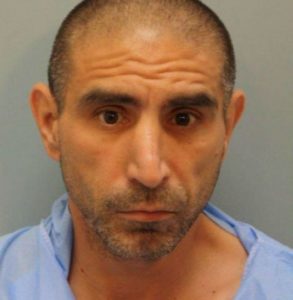 A jury took less than 30 minutes before finding Robert Solis, 50, guilty in the killing of Harris County Sheriff’s Deputy Sandeep Dhaliwal during a September 2019 traffic stop in a residential cul-de-sac 18 miles (29 kilometers) northwest of Houston.

Authorities say the 42-year-old deputy was shot multiple times from behind after he stopped Solis and was walking back to his patrol car.

Just before his trial began last week, Solis fired his court appointed attorneys and chose to represent himself.

Solis testified in his own defense and told jurors he had accidentally shot Dhaliwal.

Prosecutors argued Solis deliberately shot Dhaliwal because he didn’t want to go back to jail. At the time of the traffic stop, Solis had a warrant for violating parole.

Dhaliwal was described by Harris County Sheriff Ed Gonzalez as “a trailblazer” because he was the first Sikh deputy with the sheriff’s office when he joined the force around 2009. 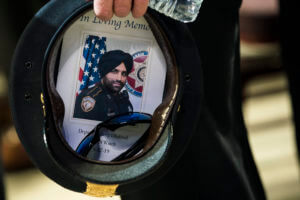 FILE – A Houston Police officer places a picture of Harris County Sheriff’s Deputy Sandeep Dhaliwal in his hat during the deputy’s funeral at Berry Center on Oct. 2, 2019, in Houston. A man was convicted of capital murder on Monday, Oct. 17, 2022, in the 2019 shooting death of the law enforcement officer who was the first Sikh deputy in his Texas agency. (Brett Coomer/Houston Chronicle via AP, File)

Gonzalez’s predecessor as sheriff, Adrian Garcia, implemented a religious accommodation policy that allowed Dhaliwal to wear the traditional turban and beard of the Sikh religion.

Garcia, who is now a Harris County commissioner, was in a public meeting Monday afternoon when he paused to announce the guilty verdict.

“I know this won’t bring him back but it is some measure of justice,” Harris County Judge Lina Hidalgo, the county’s top elected official, said during the meeting before holding a moment of silence to honor Dhaliwal.