NEW YORK (AP) — A search was underway Monday for a gunman who has been stalking homeless men sleeping on the streets of Washington, D.C., and New York City, fatally shooting two people and wounding three more in less than two weeks.

Police released surveillance photographs of the suspected gunman late Sunday, including one in which the hooded man can be seen holding a pistol in a blue glove. 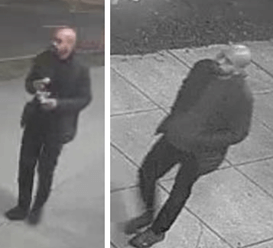 This photo provided by the Metropolitan Police Department in Washington, D.C. shows an individual wanted by police in a series of shootings involving homeless people in New York City and Washington, DC. (MPD)

The killer’s motive — if any — was unknown and authorities turned their attention Monday to trying to offer what protections they could to homeless people who might become targets.

New York Mayor Eric Adams said police officers and homeless outreach teams would focus on finding unhoused people in the subways and other locations and would urge them to seek refuge at city-owned shelters.

The earliest known shooting happened at around 4 a.m. on March 3 in Washington D.C., police said, when a man was shot and wounded in the city’s Northeast section. A second man was wounded on March 8, just before 1:30 a.m.

At 3 a.m. the next day, March 9, police and firefighters found a dead man inside a burning tent. A subsequent autopsy revealed that the man had died of multiple stab and gunshot wounds.

At 4:30 a.m. Saturday, a 38-year-old man sleeping on the street in Manhattan not far from the entrance to the Holland Tunnel was shot in his right arm as he slept.

The victim screamed and the gunman fled, police said.

About 90 minutes later, the gunman fatally shot another man on Lafayette Street in SoHo, police said. The man’s body was found in his sleeping bag just before 5 p.m. Saturday.

Police determined the same person committed the attacks based on the similarities of each shooting and evidence recovered from the scenes. The victims were attacked without provocation, police said. 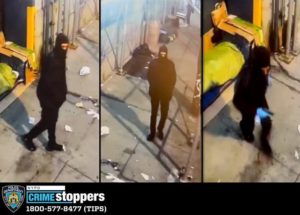 This photo provided by the NYPD shows an individual wanted by police in a series of shootings involving homeless people in New York City and Washington, DC. (NYPD Crime Stoppers)

“We are committed to sharing every investigative path, clue and piece of evidence with our law enforcement partners to bring this investigation to a swift conclusion and the individual behind these vicious crimes to justice,” Metropolitan Police Chief Robert Contee said in a news release.

The federal Bureau of Alcohol, Tobacco, Firearms and Explosives is assisting in the investigation.

The attacks were reminiscent of the beating deaths of four homeless men as they slept on the streets in New York’s Chinatown in the fall of 2019. Another homeless man, Randy Santos, has pleaded not guilty to murder charges in those attacks.

A year ago, four people were stabbed in New York City, two fatally, by a man who randomly attacked homeless people in the subway system. That assailant, who was also homeless, is awaiting trial.