PHOENIX (KNXV) — Police say a Valley mother is facing a first-degree murder charge after allegedly shooting her two children at a home in south Phoenix.

Phoenix police said they responded to a shooting call at around 11:45 a.m. Monday near 8th Street and Broadway Road, where they located two children — a boy and a girl — with gunshot wounds. 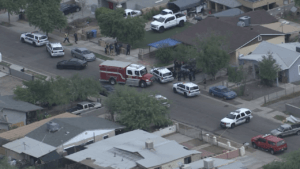 A KNXV helicopter flies over a Phoenix residence where two children were reportedly shot. (KNXV)

Police say during the course of their investigation, they learned the children’s mother, Esther Callejas, called her husband and another family member to tell them that she just killed the kids.

Her husband and the other family member immediately called police who responded to the home and located the two children with gunshot wounds.

Authorities say Callejas was detained at the home by officers and treated for an apparent gunshot to her hand. Police say Callejas admitted to on-scene officers that she shot her children.

During an interview with police Tuesday, officials say she admitted to shooting both of her children because she wanted them to go to heaven. She reportedly told detectives she planned on killing herself after, but she was unable to reload the gun.

Callejas’ neighbors described her and the children as happy. “It’s very shocking. Nothing like this has ever happened over here,” said Keera Wood, who lives a few doors down from where the shooting happened. 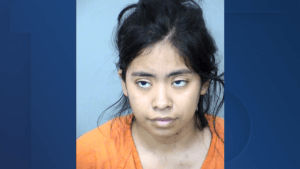 She said she’s still having a hard time understanding what happened. “I have two girls and a boy and I just…I can’t imagine something like this happening to them,” she said.

Other neighbors said Callejas seemed depressed and that they rarely saw her leave the house. “I am praying that if she needs help she gets it. You know. And praying that the baby and the rest of their family can get through this,” Woods said.

Police said the children’s father is cooperating with authorities, who are still investigating the entire case.

Late Tuesday, Phoenix police confirmed that officers were previously called to the home on Sept. 14 to conduct a welfare check after the father expressed concern about the well-being of his wife and children. Police did not elaborate on what the concern was.

The wife and children were not at the home. Police went to a family member’s home, but they were not there either. Police eventually reached the mom by phone, who said she and the kids were OK.

This story was originally published September 27, 2021, by KNXV in Phoenix, an E.W. Scripps Company.