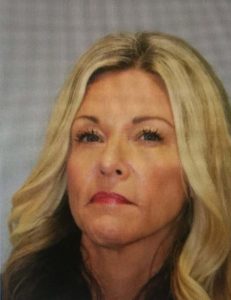 HONOLULU (AP) — The mother of two Idaho children missing since September was arrested Thursday in Hawaii.

Lori Vallow, also known as Lori Daybell,46, was arrested on a warrant issued in Madison County, Idaho, and was being held on $5 million bail, Kauai police said.

Seven-year-old Joshua “JJ” Vallow and 17-year-old Tylee Ryan haven’t been seen since late September, and police in Rexburg, Idaho, have said they “strongly believe that Joshua and Tylee’s lives are in danger.”

The tangled case spans multiple states and includes investigations into three separate deaths. Lori Vallow’s estranged husband, Charles Vallow, was shot and killed in Phoenix in July by Lori’s brother, Alex Cox. Cox, who claimed the shooting was in self-defense, died of unknown causes in December.

The test results on Tammy Daybell’s remains and on Alex Cox have not yet been released.

Vallow failed to comply with a court order to produce her children before authorities on Jan. 30 in Madison County, authorities have said.

She has been charged with two felony counts of desertion and nonsupport of dependent children, Madison County Prosecutor Rob Wood said in a prepared statement. She is also charged with misdemeanors: resisting or obstructing officers, criminal solicitation to commit a crime, and contempt of court.

Wood noted that Vallow is presumed innocent until proven guilty in court. If that happens, she could face up to 14 years in prison for each count of desertion of a child, he said.

In December, Rexburg police asked Kauai police for help in locating the couple. On Jan. 26, Kauai police served a search warrant on a rented vehicle and condo they were renting in Princeville, a resort town on Kauai’s north shore. 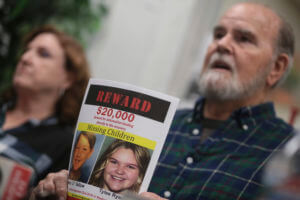 FILE – In this Tuesday, Jan. 7, 2020 file photo Kay and Larry Woodcock speak to members of the media at the Rexburg Standard Journal Newspaper in Rexburg, Idaho.  (John Roark/The Idaho Post-Register via AP, File)

A hearing date has yet to be determined to give Vallow an opportunity to waive or fight extradition to Idaho.

“The children were last seen in Idaho and there is no indication that they are on Kauai,” police said in a statement. “There are currently no criminal charges against Vallow on Kauai.”

On Kauai, there are signs that read, “Where are the children?”

The case also involves rumors of a cult. Lori Vallow reportedly believes she is “a god assigned to carry out the work of the 144,000 at Christ’s second coming in July 2020,” according to divorce documents Charles Vallow filed before his death. Chad Daybell has written several apocalyptic novels based loosely on Mormon religious theology. Both were involved in a group that promotes preparedness for the biblical end-times.

Police questioned Daybell and Vallow about the missing kids in late November, and the couple left town before police returned the next day. They were stopped by investigators in Hawaii, served with the order to produce the kids, and then searched.