ALBUQUERQUE, N.M. (AP) — The mother of an Albuquerque girl who was strangled and dismembered was sentenced Thursday to 12 years in prison for her role in the child’s death, with six of those years already served.

The punishment for Michelle Martens was handed down by a New Mexico district judge during a virtual hearing. Martens appeared on screen in an orange jumpsuit from the detention center where she has been undergoing treatment and therapy. 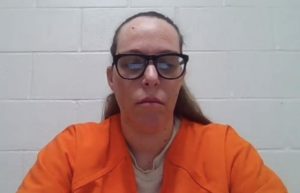 Described as a model inmate, Martens wiped away tears as her defense attorney recalled for the court how her daughter, Victoria, was a beautiful child who did well in school, was well-behaved and was loved by neighbors in the apartment complex where they lived.

State District Judge Cindy Leos said well-behaved children usually come from homes where they are loved and cared for by involved parents. Pointing to evidence and testimony gleaned during multiple court proceedings, Leos suggested that was the case in the Martens home before Michelle Martens became involved with a man who had a criminal past.

“He preyed on Ms. Martens and she was in a position at that point in her life that she was easily manipulated by him and couldn’t see what he was up to and the grave risk that was posed to her family,” the judge said. “But nevertheless, we do have a little girl who is no longer with us because of some of the decisions that were made by Ms. Martens.”

Martens pleaded guilty in 2018 to reckless child abuse resulting in death as part of a plea agreement. Her boyfriend at the time, Fabian Gonzales, and his cousin, Jessica Kelley, also were convicted of child abuse and other charges and have been sentenced to decades in prison.

Victoria Martens’ death — on her 10th birthday — sent shockwaves through the community. An officer who responded to a report of a pre-dawn disturbance at the apartment found the girl’s remains in a bathtub, partially wrapped in a blanket that had been set on fire.

The girl’s grandparents and others who knew Michelle Martens said at the time of the killing that they were mystified over how Martens got involved with Gonzales and Kelley.

Gonzales was sentenced in October to 37 1/2 years in prison. In his case, prosecutors had sought a maximum sentence of 40 years. Leos combined two of the tampering with evidence counts that related to the removal of the victim’s body parts, thus resulting in a slightly shorter prison term.

During his trial, prosecutors said that although Gonzales didn’t kill Victoria Martens, he set in motion events that created a dangerous environment that led to the girl’s death. Gonzales had moved into the apartment with Martens and her daughter.

According to investigators, Gonzales had allowed Kelley to stay at the apartment shortly after Kelley was released from prison. Investigators determined that Martens and Gonzales were not at the home when Victoria was killed but that Kelley was there.

Prosecutors said Victoria was killed either by an unknown man or by Kelley, who was using methamphetamine and acting paranoid that day. Gonzales’ attorneys argued that Kelley killed the girl then tried to cover it up.

The case remains open and authorities are looking for an unidentified man based on DNA evidence.

Michelle Martens’ attorney, Gary Mitchell, told the court that she has been participating in multiple programs while in custody and would be a good candidate for community rehabilitation. Despite teasing by other inmates, her defense team said Martens has remained calm, is doing the work needed as part of her therapy, and has learned coping skills.

Leos ordered that Martens continue with treatment once she is released and on supervised probation.