SAN DIEGO (AP) — The U.S. chief of naval operations on Tuesday denied a request for clemency and upheld a military jury’s sentence that will reduce the rank of a decorated Navy SEAL convicted of posing with a dead Islamic State captive in Iraq in 2017. 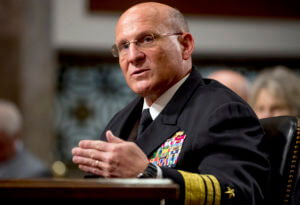 FILE – In this Wednesday, July 31, 2019 file photo, Vice Adm. Michael Gilday appears before the Senate Armed Services Committee on Capitol Hill in Washington for his confirmation hearing to be an admiral and Chief of Naval Operations. (AP Photo/Andrew Harnik, File)

Adm. Mike Gilday made the decision after carefully reviewing the trial transcripts and the clemency request by the lawyers of Edward Gallagher, said Cmdr. Nate Christensen, spokesman for Gilday, in a statement.

Gallagher’s lawyer, Timothy Parlatore, said they are disappointed in the ruling that will cost Gallagher up to $200,000 in retirement funds because of his loss of rank from a chief petty officer to a 1st class petty officer. The decision was first reported by the military online publication Task & Purpose.

A military jury acquitted Gallagher this summer of murder for the death of the wounded captive, attempted murder in the shootings of unarmed Iraqi civilians and other charges during his deployment to Mosul, Iraq.

Gallagher was given the maximum sentence of four months’ confinement and ordered to forfeit $2,697 for four months for the offense. But he served no jail time and was only required to pay the forfeiture for two months because he spent nearly nine months in pre-trial custody.

Under Navy law, Gallagher could have had his rank reduced from chief petty officer to the most junior enlisted sailor because of the time he served in custody, but Gilday opted not to impose that punishment.

Parlatore had argued Gallagher should not have been punished for the photo after serving 19 years and being awarded two Bronze stars. He noted others posing with the body were not punished. Many received immunity in exchange for testifying for the prosecution.

“Absent a presidential tweet, this is likely to be the final decision,” Parlatore said.

The case was championed by President Donald Trump, who had intervened to move Gallagher our of the brig and congratulated him in a tweet after he was acquitted of murder.

Congratulations to Navy Seal Eddie Gallagher, his wonderful wife Andrea, and his entire family. You have been through much together. Glad I could help!

Parlatore said the Navy’s case was fraught with misconduct by the investigators and prosecutors who were out to get Gallagher and that they will not be held accountable.

Gallagher’s trial came after a judge removed the lead prosecutor over a bungled effort that used software to track emails sent to defense lawyers in order to find the source of leaks to the media. 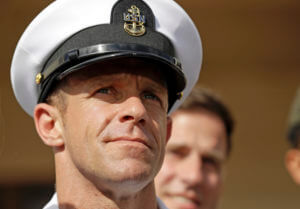 The judge determined the effort violated Gallagher’s constitutional rights and, before the case went to trial, reduced the maximum possible punishment for the murder charge from life in prison without parole to the possibility of parole.

Defense lawyers had argued that Gallagher was framed by junior disgruntled platoon members who fabricated the allegations to oust their chief.

The prosecution said Gallagher was incriminated by his own text messages and photos, including one of him holding the dead militant up by the hair and clutching a knife in his other hand.

Several SEALs testified that Gallagher stabbed the militant, including two who said they saw Gallagher plunge the knife into his neck.