GREENBELT, Md. (AP) — A neo-Nazi group member was sentenced on Thursday to nine years in prison in a case that highlighted a broader federal crackdown on far-right extremists.

FBI agents arrested former Canadian Armed Forces reservist Patrik Jordan Mathews and two other members of a group called The Base four days before a pro-gun rally in Virginia in January 2020. Surveillance equipment installed in their Delaware apartment captured Mathews and fellow Base member Brian Mark Lemley Jr. discussing an attack at the rally at Virginia’s Capitol in Richmond. 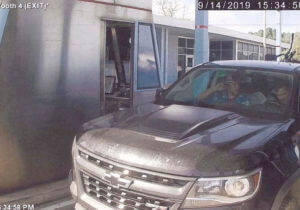 FILE – This image taken from a Sept. 14, 2019, video and released in a U.S. Attorney detention memorandum, shows Brian Mark Lemley Jr, driving, and Patrik Mathews, passenger seat, passing through a toll booth near Norfolk, Va., en route to Georgia. Mathews was sentenced on Thursday, Oct. 28, 2021 to nine years in prison in a case that highlighted a broader federal crackdown on far-right extremists. FBI agents arrested Mathews and two other members of a group called The Base four days before a pro-gun rally in Virginia in January 2020. Surveillance equipment installed in their Delaware apartment captured Mathews and fellow Base member Brian Mark Lemley Jr. discussing an attack at the rally at Virginia’s Capitol in Richmond.(U.S. Attorney via AP, File)

The judge who sentenced Mathews to prison concluded that he and Lemley intended to engage in terrorist activity. U.S. District Judge Theodore Chuang’s decision to apply a “terrorism enhancement” to their sentences significantly increased their recommended prison terms under federal guidelines.

Chuang said recorded conversations between Mathews and Lemley captured the “virulence” and “passion” in their willingness to kill people and bring down the U.S. government.

“The court rejects the notion that this was merely talk among friends,” the judge said.

Mathews, 29, said he isn’t a “mean person” and regrets befriending “the wrong people.”

“I got involved with people who were extreme, very extreme, and hateful to the point of action,” he told the judge.

Mathews and Lemley, a 35-year-old U.S. Army veteran who also is scheduled to be sentenced on Thursday, pleaded guilty in June to gun charges in Maryland. They weren’t charged with any violent crimes, but prosecutors called them domestic terrorists.

The closed-circuit television camera and microphone in their apartment also captured Mathews and Lemley talk about breaking racist mass killer Dylann Roof out of prison where he is on death row, assassinating a Virginia lawmaker, destroying rail lines and power lines, derailing trains and poisoning water supplies, prosecutors said.

“We’ll give them bad guys. We will give them white supremacist terrorists, if that’s what they want,” Mathews said on a video that he recorded in November 2019.

Mathews fled Canada after the Winnipeg Free Press published an article by an undercover reporter who met him under the guise of joining The Base. After crossing the border into the U.S., Mathews lived at a Georgia property where group members held military-style training camps.

Defense attorneys said the men never developed any specific plans for violence. And they argued that an undercover FBI agent who visited the Delaware apartment tried to pressure the two “damaged military veterans” into developing a plan for violence at the Virginia rally.

During the recorded conversations, Mathews and Lemley only made “generally fleeting references to imaginary scenarios without any serious exploration about particular targets or planning operations,” Mathews’ attorneys wrote in a court filing.

Patrik Mathews told the judge that he regrets leaving his homeland and just wants to return to Canada, quoting the song “Home” by Canadian singer Michael Bublé.

Prosecutors recommended 25-year prison sentences for both men. The court’s probation office calculated a sentencing guidelines range of 33 to 41 months imprisonment in both cases. Lemley’s lawyer is seeking a sentence within those guidelines, while Mathews’ attorney was seeking a prison sentence of 33 months.

The Base and another white supremacist group called Atomwaffen Division have been leading proponents of “accelerationism,” a fringe philosophy that advocates using mass violence to hasten society’s collapse. A string of arrests dealt crippling blows to both groups.

In January 2020, authorities in Georgia and Wisconsin arrested four other men linked to The Base. More than a dozen people linked to Atomwaffen or an offshoot called Feuerkrieg Division have been charged with crimes in federal court since the group’s formation in 2016.

Mathews and Lemley pleaded guilty to charges including illegally transporting a firearm and obstruction of justice, for destroying cellphones when FBI agents raided their apartment. They have remained in custody since their arrests.

The third co-defendant, William Garfield Bilbrough IV, was sentenced to five years in prison after pleading guilty in December to helping Mathews illegally enter the U.S. from Canada in 2019.