ALBANY, N.Y. (AP) — A judge sided with former New York Gov. Andrew Cuomo on Tuesday in his dispute with a now-defunct state ethics commission that ordered him to give up $5 million he was paid to write a book about his leadership during the COVID-19 pandemic.

The Joint Commission on Public Ethics initially approved Cuomo’s request to write the book, titled “American Crisis: Leadership Lessons from the COVID-19 Pandemic,” in 2020. But the panel withdrew that approval the following year after alleging Cuomo hadn’t kept a promise not to use any state resources on the book. 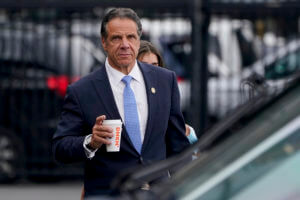 Cuomo acknowledged that state employees helped with tasks including editing the manuscript. But he’s said those employees did that work voluntarily during their personal time.

Last year the commission, commonly referred to by the acronym JCOPE, gave Cuomo 30 days to give up $5.1 million he was paid by a publisher for the book. Cuomo sued, claiming the commission’s members were biased against him and violated his due-process rights.

In Tuesday’s ruling, state Judge Denise A. Hartman declined the commission’s request that she enforce its order for Cuomo to turn over the money. Hartman characterized it as an attempt to sidestep administrative procedures, since the penalty was imposed without a required administrative hearing.

Gov. Kathy Hochul, a Democrat like Cuomo, signed legislation disbanding the commission this year in favor of a new one. It isn’t clear whether the new commission will continue trying to claw back Cuomo’s book money.

“If, upon a review of JCOPE’s actions, the new commission decides to pursue action against Cuomo, proceeds with the adjudicatory hearing, and determines that a violation has occurred, the new Commission may then impose a civil penalty against him,” Hartman wrote.

A message was left with an attorney representing the commission.