NASCAR has released the image of the noose found hanging in Bubba Wallace’s garage stall at Talladega Superspeedway. 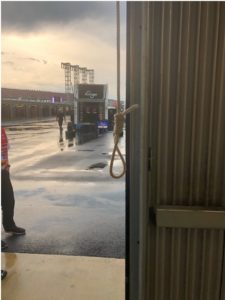 Federal authorities announced that no charges were being filed in the incident that sparked widespread support for NASCAR’s only full-time black driver.

A crew member for Richard Petty Motorsports discovered the noose Sunday, June 21 at the Alabama race track. The FBI was contacted and they sent 15 agents out to investigate. They determined that the noose had been there for months and was only now noticed. 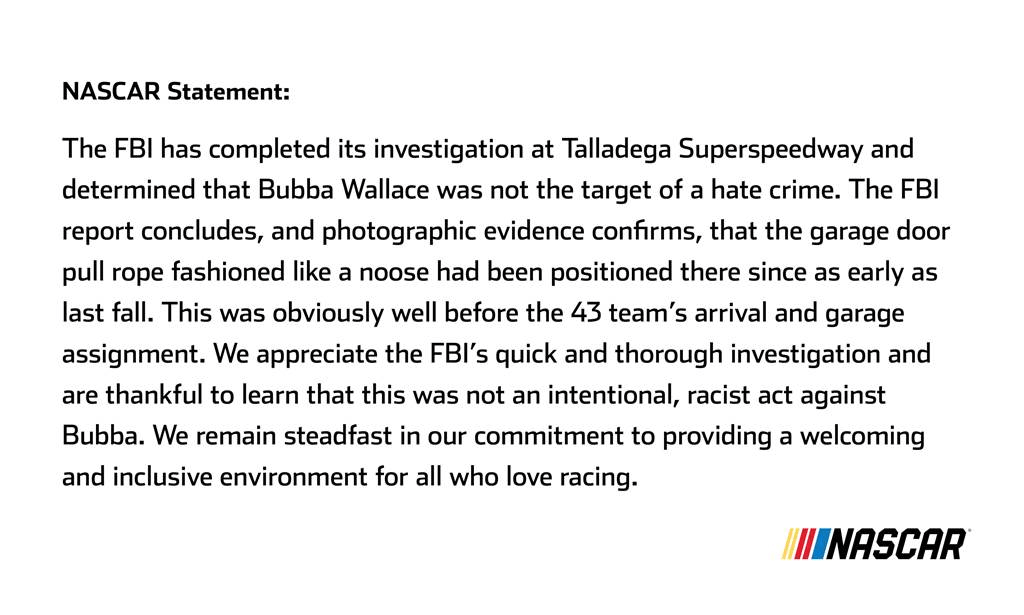 ORIGINAL STORY: 6/23/20 The noose found hanging in Bubba Wallace’s garage stall at Talladega Superspeedway had been there since at least last October, federal authorities said Tuesday in announcing there will be no charges filed in an incident that rocked NASCAR and its only fulltime Black driver. 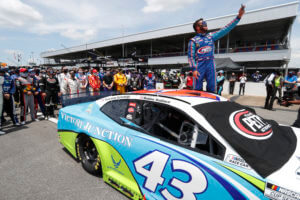 FILE – In this June 22, 2020, file photo, Bubba Wallace takes a selfie of himself and of other drivers who had pushed his car to the front in the pits at Talladega Superspeedway before the NASCAR Cup Series auto race in Talladega Ala., Monday June 22, 2020. The noose found hanging in Wallace’s garage stall at Talladega had been there since at least last October, federal authorities said Tuesday, June 23, in announcing there will be no charges filed in an incident that rocked NASCAR and its only fulltime Black driver. (AP Photo/John Bazemore, File)

U.S. Attorney Jay Town and FBI Special Agent in Charge Johnnie Sharp Jr. said an investigation determined “although the noose is now known to have been in garage number 4 in 2019, nobody could have known Mr. Wallace would be assigned to garage number 4 last week.”

A crew member for Richard Petty Motorsports discovered the noose Sunday at the Alabama race track. NASCAR was alerted and contacted the FBI, which sent 15 agents to the track to investigate. They determined no federal crime was committed.

The statement said the garage stall was assigned to Wallace last week in advance of the race scheduled for Sunday but held Monday because of rain. Through video confirmed by NASCAR it was discovered the noose “was in that garage as early as October 2019.”

The agencies said the evidence did not support federal charges. NASCAR said a check of every other stall in the garage showed the one for Wallace’s car was the only one in which the pull down rope had been fashioned into a noose.

Wallace successfully pushed the stock car series to ban the Confederate flag at its venues less than two weeks ago. There has been criticism of the ban by some longtime fans and security had been stepped up for Wallace, a 26-year-old Alabama native who has worn in the last month a shirt over his firesuit that read “I Can’t Breathe.” His paint scheme for a race in Virginia was Black Lives Matter.

NASCAR said in a statement that “the FBI report concludes, and photographic evidence confirms, that the garage door pull rope fashioned like a noose had been positioned there since as early as last fall. This was obviously well before the 43 team’s arrival and garage assignment.” 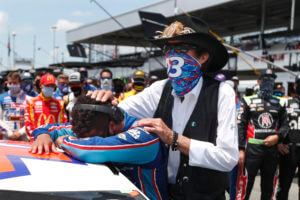 NASCAR driver Bubba Wallace is consoled by team owner Richard Petty, right, prior to the start of the NASCAR Cup Series at the Talladega Superspeedway in Talladega, Ala., Monday, June 22, 2020. In an extraordinary act of solidarity with Wallace, NASCAR’s only Black driver, dozens of drivers pushed his car to the front of the field before Monday’s race. (AP Photo/John Bazemore)

NASCAR President Steve Phelps said the series is continuing its own investigation to determine why a noose had been in that garage stall at all. He added that it wasn’t directed at Wallace was “a great conclusion for us” but was adamant NASCAR would have conducted its investigation the same way even now knowing it wasn’t a hate crime.

“We would have done the same investigation. It was important for us to do,” he said, stressing that Wallace’s race team had nothing to do with the incident.

“The evidence was very clear that the noose that was in the garage was in there previously. The last race we had in October, that noose was present. The evidence we had, it was clear we needed to look into this.”

The Wood Brothers Racing team said one of its employees informed the team he recalled “seeing a tied handle in the garage pull down rope from last fall,” when NASCAR raced at Talladega in October. The team said it immediately alerted NASCAR and assisted the investigation.

The discovery of the noose stunned the stock car series as it takes an active position in a push for inclusion while distancing itself from its rocky racial history. The series first tried to ban the Confederate flag five years ago but did nothing to enforce the order.

Wallace two weeks ago renewed the call for a ban and NASCAR answered, but it has yet to detail how it will stop the display. Talladega marked the first race since the coronavirus pandemic that fans were permitted — 5,000 were allowed to purchase tickets — and some upset with the flag ban paraded past the main entrance with the Southern symbol. A banner flew over the speedway Sunday of a Confederate flag that read “Defund NASCAR.”

NASCAR announced late Sunday the noose had been discovered and the industry rallied around Wallace. All 39 of his rival drivers and their crews helped push Wallace’s car to the front of pit road before the national anthem and stood behind him in solidarity.

Wallace was joined by his team owner, Hall of Famer Richard Petty, who gently placed a hand on Wallace’s shoulder as he sobbed. Wallace after the race went to the fencing along the grandstands and greeted supporters. Many were Black and wearing “I Can’t Breathe” shirts.

“It’s just been hectic, you know, carrying this weight,” he said. “I’m proud to stand where I’m at and carry a new face. Look at (these fans). Is this the first time you’re here? From Atlanta? That is so cool! The sport is changing.” 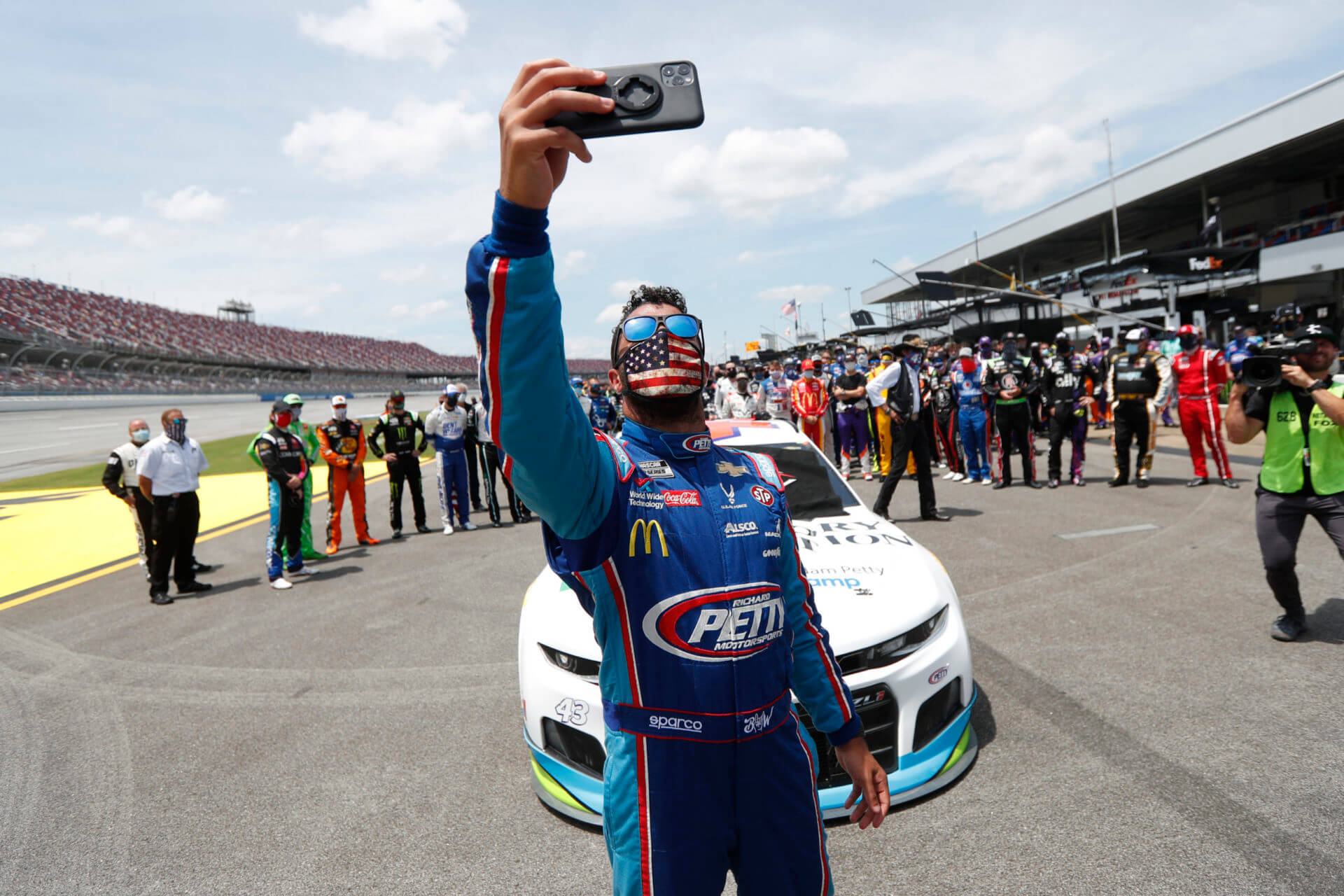 Driver Bubba Wallace takes a selfie with himself and other drivers that pushed his car to the front in the pits of the Talladega Superspeedway prior to the start of the NASCAR Cup Series auto race at the Talladega Superspeedway in Talladega Ala., Monday June 22, 2020. In an extraordinary act of solidarity with NASCAR’s only Black driver, dozens of drivers pushed the car belonging to Bubba Wallace to the front of the field before Monday’s race as FBI agents nearby tried to find out who left a noose in his garage stall over the weekend. (AP Photo/John Bazemore)
MORE NEWS