JACKSONVILLE, Fla. (AP) — A nurse who previously worked at a Florida hospital has been sentenced to a year and a day in federal prison for stealing fentanyl and replacing the powerful pain medication with saline.

Monique Elizabeth Carter, 36, of Middleburg, was sentenced Tuesday in Jacksonville federal court, according to court records. She pleaded guilty in April to tampering with a consumer product. 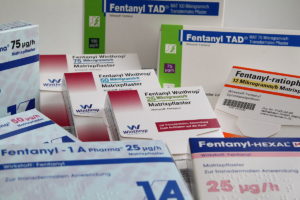 According to the plea agreement, Carter was working in the neural intensive care unit of Baptist Medical Center Jacksonville last September when a hospital pharmacist examining the ICU wing’s inventory of fentanyl found a syringe missing a tamper-proof cap but with some form of foreign adhesive remaining at the tip. A second fentanyl syringe had a cap that appeared to have been glued back onto the syringe, it said.

Authorities said a pharmacist supervisor reviewing hospital records found a pattern of Carter checking out doses of fentanyl for patients but then canceling the transactions and checking syringes back into the hospital’s inventory. Records showed that Carter did so 24 times over the preceding month.

When confronted with the findings, Carter eventually admitted that she had been stealing fentanyl for personal use for several months, officials said. Carter denied injecting herself with the drug while on duty. Law enforcement officers reported finding needles, saline syringes and adhesive in her bag.

As a registered nurse, Carter knew that her actions likely resulted in critically ill patients receiving diluted fentanyl that was not safe and effective, prosecutors said. Having been deprived of sterile, medically necessary medication, such patients were exposed to possible infection and endured unnecessary pain and suffering, officials said. They said the failure to anesthetize or control pain in intensive care unit patients can also increase the risk of illness or death from respiratory, cardiovascular and musculoskeletal complications.