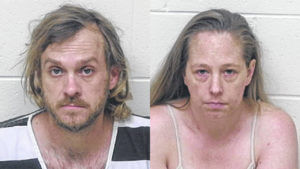 Daniel and Jessica Groves are facing life in prison in the death of their two-month-old son, Dylan. The couple is facing multiple charges, including murder and gross abuse of a corpse. They were arrested in June after Dylan Groves’ decomposed body was found at the bottom of a 30-foot well near their home. According to the Montgomery County Coroner’s Office, Dylan’s body was wrapped in plastic bags and duct tape, then placed in milk crates secured by chains, padlocks and zip ties. Dylan’s cause of death was determined as “homicidal violence.” The child had suffered multiple bone fractures and broken ribs. Methamphetamine and amphetamine were also found in his system.

Scioto County authorities believe Dylan, who was born Jan. 10, 2019, died in late March. Scioto County Children Services opened an investigation into his whereabouts that May after Daniel Groves missed court dates, home visits and doctors appointments. Dylan was initially placed in foster care after his was born with drugs in his system. His biological father, Daniel Groves, gained custody on a trial basis.

On June 11, the couple was reportedly arrested on charges of abduction, kidnapping and interference of custody. That day, Daniel Groves led authorities to Dylan’s body after barricading himself inside his home for six hours. Days later, the couple was also indicted on charges of aggravated murder, tampering with evidence, gross abuse of a corpse and four counts of felonious assault.