LOS ANGELES (AP) — Authorities arrested a 31-year-old man Wednesday in connection with the slaying of a woman while she worked at a Los Angeles furniture store last week.

Shawn Laval Smith was taken into custody shortly before noon Wednesday in Pasadena, according to a Twitter post by the Los Angeles Police Department.

Someone recognized Smith from photos distributed by the LAPD as he used the restroom inside a restaurant in Pasadena and police in the Los Angeles suburb took him into custody at a bus bench, KCBS-TV reported.

Investigators had offered a $250,000 reward during a news conference Tuesday for information leading to Smith’s identity, arrest and conviction in the fatal stabbing of Brianna Kupfer, 24.

Smith is a transient who has been seen in several Southern California cities along with San Diego and San Francisco, police said.

Kupfer was alone in the Croft House in the Hancock Park neighborhood last Thursday afternoon when she was stabbed, police have said.

“She sent a text to a friend saying there was someone inside the location that gave her a bad vibe. Regrettably, that person did not see the text immediately,” Lt. John Radtke said.

“Detectives have determined the suspect was not known to the victim and was a random walk-in to the store,” police said. “The suspect attacked the victim with a knife and fled the scene through the back door.”

A customer found her dead about 20 minutes later, police said. 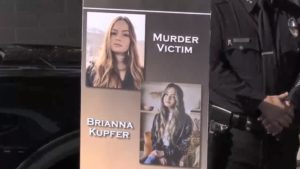 This image from video shows murder victim Brianna Kupfer. Kupfer was killed on Jan. 13 while working at a Los Angeles furniture store. (YouTube/LAPD)

Kupfer was one of four children, graduated from the University of Miami and was working on a master’s degree in architectural design at UCLA.

“I never really worried about Brianna,” her father, Todd Kupfer, told KABC-TV. “She worried more about herself. She was always striving to improve herself and she always had these goals and dreams.”

It was not immediately clear whether Smith had an attorney who could speak on his behalf.

Smith had a history of arrests — mainly for relatively minor offenses — dating back to 2010 and has a pending felony case in South Carolina for allegedly firing a flare gun at a car with a toddler inside in 2019 in Mount Pleasant, Fox News reported.

However, a case backlog due to the coronavirus pandemic has effectively kept that case from proceeding, Fox said.

Smith also had run-ins with police in California.

Court documents show that in 2017, Smith was charged in San Diego with carrying a concealed dagger and using the knife in a threatening manner, pleaded guilty and was sentenced to six months in jail, KGTV-TV reported. 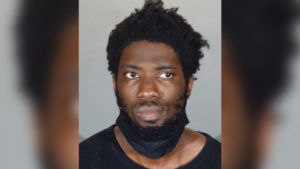 This undated booking photo provided by the LAPD shows murder suspect Shawn Laval Smith, who is accused of killing Brianna Kupfer at a Los Angeles furniture store on Jan. 13. (LAPD)

Fox reported that Smith was cited for allegedly possessing stolen property in 2020 outside of a Home Depot but wasn’t prosecuted and last June he was given probation for resisting arrest for allegedly attacking a police officer. However, his probation was revoked in November because he failed to heed requirements of a plea deal, Fox said.

Kupfer’s killing came on the same day as an unrelated homicide — also allegedly perpetrated by an unhoused person — at a downtown Los Angeles bus stop.

Sandra Shells, a 70-year-old nurse, was on her way to work at LA County-USC Medical Center.

The suspect struck Shells in the face, police said. She fell backward and hit her head on the ground. She died Sunday at a hospital.

Kerry Bell, 48, was charged with murder in Shells’ death. He is being held on $2 million bail; his arraignment is scheduled for Feb. 9. It wasn’t immediately known whether he has a lawyer to speak on his behalf.