Eckert’s daughter said she spoke with her mom on Facetime the day she went missing. When Eckert didn’t show up to Easter brunch, her daughter went to Franklin police and reported her missing.

A few weeks later, investigators searched Sandy’s home. Franklin Police say they took some electronic devices and other evidence. The search warrant remains sealed because the investigation is still active.

The day after the search, WTMJ went to the home and spoke with Sandy’s husband, Wes. He said following an argument, Sandy took off in his car—a 2005 Dodge Stratus. The car was last seen in Muskego on March 27, 2021. Franklin Police say they have searched bodies of water near where the car was last seen.
“She comes down with a coat on, and the last thing she said was, you’ll hear from my lawyer,” Wes Eckert told WTMJ on April 16, 2021.

On Friday, June 17, Franklin police confirmed to WTMJ that they were now investigating Eckert’s disappearance as a homicide and they are looking for two people of interest.

Eckert’s husband, Wes, says detectives have named him and his brother “persons of interest” in the case.

“There’s no evidence and plenty of lies,” said Wes, referring to how police are handling the investigation.

He says police showed up at his brother’s home last week with guns drawn, and took his brother’s cell phone, computer, guns for hunting, and cash.

“They said her cell phone was in his driveway,” said Wes. “That is just not true. They searched my home a year ago too, found nothing, and still have my stuff.” 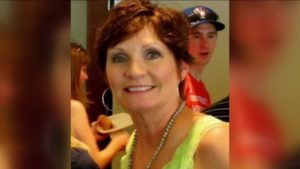 Wes says after searching his brother’s home, Franklin police showed up at his house.

“They were yelling at me, saying he was down in a jail cell crying,” said Wes. “They told me I should go down and tell the truth to save him. They asked why I was letting him take the blame. It is a total squeeze job, and there is nothing to squeeze out my brother or me.”

Franklin police confirm they took one man into custody June 7 to conduct a search warrant at a Waukesha home in connection to first-degree intentional homicide/hiding a corpse charge. The man was later released.

At this time, no one is in custody in connection to Sandra Eckert’s case, and no charges have been referred to the Milwaukee County District Attorney’s Office.

Search warrants and all other documents related to this investigation are under a court order seal. Police say that is to protect the integrity of the investigation.

Wes says Sandra left their home in Franklin on March 26, 2021 in their gray Dodge Stratus. Franklin police say the car was last seen being driven later that night in Muskego. The car is also still missing.

Wes was the last person to interact with Sandra.

“Early in the night we had an argument,” he said. “The last thing she told me was that I was going to hear from her lawyer. So, at first, I was sitting around waiting for a lawyer to show up and ruin the rest of my life. I worked two jobs my whole life and I got money, and I like to keep it. She took a lot of cash with her, but she has not been spending money. She has friends in all parts of the country. But I do believe there has been foul play because I would have heard from her. She would not have left her kids.”

Some of the couple’s four kids are offering a $50,000 reward for any information about their mom.

On Friday, WTMJ received the following statement from one of her daughters:

“We are beyond grateful to law enforcement and the community for all the work and effort put into my mom’s case thus far. It’s promising to know that answers and justice are on the horizon. Although answers won’t bring my mom back, they will help to properly grieve and honor her. I won’t stop fighting until she gets the justice she deserves and I thank each and every person that has helped get us to this point. A lot of progress has been made so I’m begging if anyone else knows any other details or information to please call the Franklin police. Thank you.”

WTMJ was also provided the following statement from one of her sons:

“More or less my statement would just be that it’s very reassuring to so all of our efforts and pain the past year hasn’t been for nothing. That I’m glad we are getting closer to answers and closure, and even though those won’t make things better, and that we still have to live with the harsh reality of what they did. But my mother deserves better than being another missing persons poster, and we will not rest until we justice for her.”

This story was originally published June 17 by WTMJ in  Milwaukee, an E.W. Scripps Company.