CHEEKTOWAGA, N.Y. (AP) — A pilot who appeared to be drunk was removed from the cockpit of a JetBlue flight as it was about to take off from Buffalo, police said. 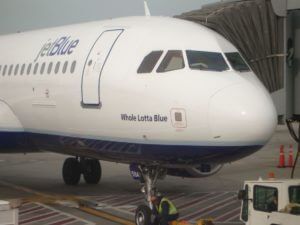 The flight was temporarily delayed Wednesday morning. Passengers on their way to Fort Lauderdale, Florida, said they watched from the plane as the pilot — one of two scheduled for the flight — was placed in a patrol car.

“Whatever the procedures are before you fly, they should have caught him before he was on the plane but they didn’t. He was on the plane in the cockpit,” Desiree Breckenridge Barnes-Jean told WGRZ-TV. “The upsetting thing is all of our lives would have been jeopardized.”

The pilot was identified as James Clifton, 52, of Orlando, Florida. He could not be reached by phone for comment Thursday.

The police report indicates that prior to boarding, Clifton seemed “off” to Transportation Security Administration agents, prompting Niagara Frontier Transportation Authority police to pull him from the cockpit and perform a breath test for alcohol.

Clifton’s copilot said that the two had gone out for dinner the night before, and that Clifton stayed behind at the restaurant when he left. He missed the airport shuttle the next morning and arrived late to the airport in an Uber, the report said.

JetBlue Airways Corp., in a statement, said “the crewmember involved has been removed from his duties.”

“The safety of JetBlue’s customers and crewmembers is our first priority. We adhere to all (Department of Transportation) rules and requirements concerning alcohol at all times and have a very strict zero tolerance internal alcohol policy,” according to the statement, which said an internal investigation was planned.