LAS VEGAS (AP) — New Orleans Saints running back Alvin Kamara is accused of punching and badly injuring a man in an attack also involving at least three men who were with Kamara last weekend at a Las Vegas Strip nightclub, according to a police arrest report.

The alleged victim told Las Vegas police he fell unconscious on the floor, where police said video showed him being punched, kicked and stomped on by three people who accompanied Kamara at the rooftop nightclub Drai’s at the Cromwell hotel-casino. 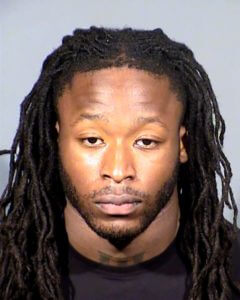 “At no point during this attack did (the man) hit, punch or push Kamara or any of his associates,” said the police report made public Tuesday.

The identities of the three other alleged attackers were blacked out in the police report. No other arrests have been made. Officer Larry Hadfield, a Las Vegas police spokesman, called the investigation ongoing.

Police said the attack happened about 6:30 a.m. Saturday outside an elevator at Drai’s, and the alleged victim first spoke with police at a hospital about 5:30 p.m. Police attributed the delay to the man receiving medical treatment.

Kamara played in the NFL Pro Bowl at noon local time Sunday before police interviewed him at Allegiant Stadium after the game. He was arrested about 3:30 p.m. on suspicion of felony battery resulting in substantial bodily harm.

Kamara posted bond for his release from the Clark County jail. He has a March 8 court date. A conviction on the felony charge could result in a sentence of one to five years in state prison.

Kamara’s attorneys, Drew Findling in Atlanta and David Chesnoff and Richard Schonfeld in Las Vegas, released a statement promising to investigate “all of the circumstances and individuals associated with this matter to determine both the facts and motivations of all involved.”

The defense attorneys’ statement portrayed Kamara as a “hard-working and community minded individual” and called the allegations against him “not consistent with who Mr. Kamara has shown himself to be in both his public and private life.”

An NFL spokesman, Brian McCarthy said the matter was being reviewed under the league’s personal conduct policy.

At New Orleans Saints headquarters in Metairie, Louisiana, newly named team head coach Dennis Allen called it too early for him to comment about Kamara’s arrest.
“I think we’ve got to gather all the information before we have any sort of comment on that,” he said.

Kamara punched the man approximately eight times, according to the police report, while the three men with Kamara stomped on the man’s face, chest and legs a total of more than 20 times.

Police said the incident began when Kamara put his hand on the man’s chest to stop him from entering the elevator, the man pushed the football player’s hand away, a person with Kamara punched the man, and Kamara “immediately attacked.”

When police asked Kamara why he punched the man, “Kamara indicated he thought (the man) was running away and had done something to his group so he chased and punched (him) several times,” a police detective said in the report.

Kamara also told police he remembered the man calling one of his friends ugly and later threatening to “whoop” someone.

Kamara is one of the top running backs in the NFL. He had more than 1,300 yards from scrimmage and nine touchdowns on the way to being selected for his fifth Pro Bowl in five seasons.
___
Associated Press writers Kate Brumback in Atlanta and Brett Martel in Metairie, Louisiana, contributed to this report.