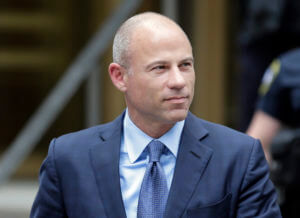 NEW YORK (AP) — Prosecutors say California attorney Michael Avenatti was over $15 million in debt when he tried to extort up to $25 million from Nike, while Avenatti’s lawyers say the money he legally requested to conduct an internal probe of the sportswear giant was a bargain.

Both sides made the assertions in court papers filed late Tuesday in advance of a Jan. 22 criminal trial in Manhattan, giving U.S. District Judge Paul G. Gardephe time to decide what the jury will be allowed to hear and see.

For Avenatti, it is the first of three scheduled trials in the next five months. He has denied all charges.

In their submission, federal prosecutors said they plan to show the jury that Avenatti owed “conservatively, in excess of $15 million.” Those debts were owed to former clients, one of more former law partners, both of his former spouses for child and spousal support in arrears and a lawyer the government has identified only as “Attorney-1,” they said.

Avenatti told The Associated Press on Wednesday that “any claim that I was $15 million in debt is ridiculous, absurd and laughable.”

“I look forward to the upcoming trial at which time I will be exonerated and the truth will be known,” he said.

Prosecutors, however, say they plan to prove the debts through documents and testimony from a witness who helped Avenatti manage his finances and a law enforcement witness.

The evidence will prove “that he had extraordinary indebtedness, and thus the need and motive to quickly generate substantial sums of money at the time when he engaged in the charged conduct,” prosecutors wrote.

They said the debts were relevant at trial to expose Avenatti’s motives, particularly because he has asserted that his motives were “benign or even altruistic.”

Avenatti’s lawyers asserted in their papers Tuesday that Avenatti late last winter was seeking between $15 and $20 million to conduct an internal probe within Nike after lawyers for the company indicated they were interested in such a probe.

Avenatti’s lawyers said thousands of pages of documents submitted to federal prosecutors by Nike in response to a 2017 grand jury subpoena revealed that payments by Nike for the benefit of amateur players “were pervasive,” including payments to high school players through at least 10 different coaches for a Nike-sponsored youth basketball league.

They cited a story by The New York Times that said internal investigations by companies can exceed $100 million, saying Avenatti had sent a link to the story to Mark Geragos, a lawyer he hired to help negotiate with Nike on behalf of an amateur coach who wanted corruption to end. Avenatti plans to seek testimony from Geragos at trial.

Avenatti also plans to assert that Nike, knowing federal prosecutors were investigating its role in payments to young athletes and basketball coaches, was motivated to cooperate against a high-profile person “against whom the leader of the Executive Branch had expressed disdain.”

President Donald Trump and Avenatti had criticized one another on the internet at a time when Avenatti was appearing frequently on television while he represented Daniels. Daniels has said she had an affair with Trump before he became president. Trump has denied it.