WAKEFIELD, Mass. (Court TV) – “I don’t speak German.” Those were the first words Michael McDermott said to police moments after he gunned down seven co-workers at Edgewater Technology in Wakefield, Massachusetts, on Dec. 26, 2000. It was also the only statement McDermott made to investigators until he testified at his murder trial more than a year later. 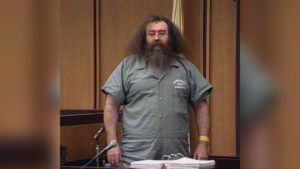 Michael McDermott takes the stand in his own defense April 11, 2002, in Wakefield, Mass. (Court TV)

McDermott, a 43-year-old computer programmer, had worked at Edgewater Technology for about a year before the shooting. He was a U.S. Navy veteran who formerly worked in the engine room of a nuclear submarine, as well as a nuclear power plant in Maine. He also held a patent for work he did on lithium batteries during his employment at Duracell.

On the day after Christmas in 2000, McDermott and others in his office returned to work after the long holiday weekend. Co-workers who spoke with McDermott before the shooting described him as jovial and happy.

Just after 11 a.m., McDermott left his cubicle armed with an automatic weapon, a shotgun and a pistol.

At trial, eyewitness Margaret Lynch testified she heard McDermott tell victim Jennifer Bragg Capobianco that he needed to “see someone in Human Resources” before raising his weapon.

Two weeks before the killings, McDermott was told by Cheryl Troy that his paycheck was going to be garnished to pay back his car loan, but she and other Edgewater managers had decided to delay enforcing the edict until after the Christmas holidays.

Prosecutors argued McDermott was enraged with the Edgewater staffers who were complying with the IRS order for the garnishment. They presented evidence showing McDermott test fired his weapons on Christmas Eve, and that he stashed those weapons in his cubicle on Dec. 25, after spending the day with his family.

McDermott’s defense team claimed he was not guilty by reason of insanity, pointing to his documented history of Schizophrenia and two previous attempts to take his own life.

When the defense delivered their opening statement at the start of their case-in-chief, it was the first time anyone heard about McDermott’s belief that he was killing Adolf Hitler and six other Nazis in 1940s Berlin when he opened fire at Edgewater Technology. 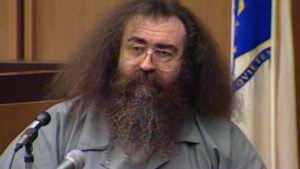 Michael McDermott takes the stand in his own defense April 11, 2002, in Wakefield, Mass. (Court TV)

Court TV anchor Vinnie Politan, who covered McDermott’s trial in 2000, said you could hear a pin drop in the courtroom when McDermott took the stand in his own defense.

McDermott told the jury that after he found out about the IRS garnishment, he went back to his cubicle to pray and was visited by St. Michael the Archangel and taken to a celestial plane. He testified that St. Michael told him God had a plan for him and that if he went back in time to 1940 and killed Hitler and six other architects of the Holocaust, he could earn a soul.

Jurors didn’t accept McDermott’s claim of insanity and found him guilty of seven counts of murder. He was sentenced to seven life sentences and while he was escorted from the courtroom, the victims’ families applauded. He is currently housed by the Massachusetts of Department of Corrections in the Old Bay Correctional Center.

The case of Massachusetts v. Michael McDermott is featured in the upcoming Court TV documentary Rampage Killers, airing Sunday, Oct. 2, 2022 at 9p.m. EST. What motivates a rampage killer? Court TV sits down with psychologists, investigators, survivors, and conducts a prison interview with convicted mass shooter, Jeffrey Wade Wallace, to find out. Five years after the Las Vegas shooting massacre, this provocative Court TV documentary explores why our understanding the psyche of a rampage killer is vital in preventing the next mass murder.