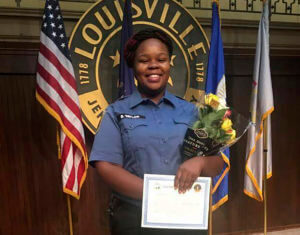 Goodlett will plead guilty to one count of conspiring to violate Taylor’s civil rights for helping falsify an affidavit for the search of her apartment, the Courier Journal reported Friday. She faces a sentence of no more than five years in prison.

Taylor was shot by officers who knocked down her apartment door while executing a search warrant. Taylor’s boyfriend fired a shot that hit one of the officers as they came through the door, and they returned fire, striking Taylor multiple times.

The charges — most of which stem from the faulty drug warrant used to search Taylor’s home — are an effort to hold law enforcement accountable for the killing of the 26-year-old medical worker. One of the officers was acquitted of state charges.

Goodlett was expected to plead guilty — and testify against her colleagues — because she was charged by information rather than indicted, the Louisville newspaper reported.

The Justice Department is also conducting a non-criminal investigation of the Louisville Police Department. Announced last year, that probe is scrutinizing whether the department has a pattern of using excessive force and conducting unreasonable searches and seizures.

In the racial justice protests of 2020, Taylor’s name was often shouted along with that of George Floyd, who was killed less than three months after Taylor by a Minneapolis police officer in a videotaped encounter that shocked the nation.