SEATTLE (AP) — A young woman made two harrowing attempts to escape her vicious pimp — including jumping out a third-story window — before being rescued by a ride-share driver who engaged in a gunfight with the man, prosecutors in Seattle said. 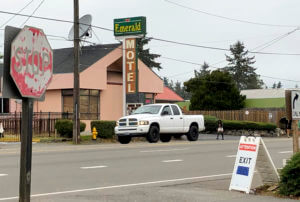 Cars drive by the Emerald Motel in North Seattle on Friday, Nov. 11, 2022. Prosecutors say a 20-year-old woman made a harrowing escape from her vicious pimp outside the motel on the night of Saturday, Nov. 5, before being rescued by a ride-share driver who engaged in a gunfight with the man. (AP Photo/Gene Johnson)

Winston Burt, 30, who uses the street name “Dice Capone,” was arrested shortly afterward as he was leaving a rental home accompanied by other women he had trafficked, authorities said.

The 20-year-old woman who escaped had been taken from California to Seattle to perform sex acts for money, prosecutors said in charging documents in King County Superior Court. She first tried to escape Burt by jumping nearly naked from the high window, they said. She finally succeeded after running from his car and sitting topless on a highway until the ride-share driver helped her.

The woman, identified only by her initials, H.A., was taken to a hospital with injuries including black eyes, broken ribs, a broken leg and spinal injuries.

Burt was being held on $750,000 bail and is set to be arraigned Thursday. It was not immediately clear if he had an attorney who might speak on his behalf. Details of the case were first reported by The Seattle Times.

His street name was tattooed on the faces of at least two of the women he trafficked as a sort of brand, authorities said.

“The defendant leads a sex trafficking enterprise that has operated in at least three U.S. states involving multiple victims, who have been exploited, harmed and maimed by the defendant’s violent and coercive actions,” Senior Deputy Prosecutor Benjamin Gauen wrote in charging papers.

According to investigators, Burt, H.A. and two other young women arrived in Seattle about a month ago. They stayed in a $1.4 million, six-bedroom home near Seward Park in South Seattle that was rented through Airbnb.

Burt would drive the women to a stretch of Aurora Avenue in North Seattle where prostitution is common and ensure they had rooms at a motel for their “dates,” the charging papers said. Each woman was expected to make at least $2,000 per day; they turned over all the money, and he provided food, clothes and housing and controlled them completely, the charging documents said.

H.A. told police she had been “working” for Burt for about four months in California and Arizona, as well as Seattle, according to documents. It was only in the past few weeks, after she and another woman said they wanted to quit prostitution and return home, that he started beating her, she said.

He attacked the other woman, identified as S.T., in the rental home, kicking and pistol-whipping her until her eyes swelled shut, prosecutors said, and he forced the other women to participate in the attack, as well. 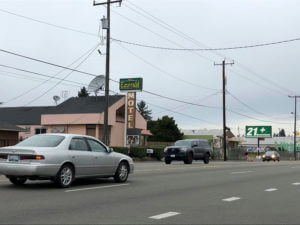 Cars drive by the Emerald Motel in North Seattle on Friday, Nov. 11, 2022. Prosecutors say a 20-year-old woman made a harrowing escape from her vicious pimp outside the motel on the night of Saturday, Nov. 5, before being rescued by a ride-share driver who engaged in a gunfight with the man. (AP Photo/Gene Johnson)

On Nov. 2, he similarly beat and pistol-whipped H.A. after she said she wanted to leave, prosecutors said. Her lip split open so badly that it appeared to be hanging off her face, she told police.

For three days after that, she remained stuck at the rental home, prosecutors said, with no phone, money or anywhere to go. Her face was swollen and she suffered extreme rib pain.

Saturday evening, Burt began punching her again and ordered her to take off the clothes he had given her, Gauen wrote.

Wearing only underwear, she tried to escape out the front door, but Burt picked her up and slammed her to the ground, he wrote. Fearing she would be killed, she ran upstairs with Burt chasing her and then jumped from the third-story window.

She landed on the ground, hobbled into the street and flagged down a car with two women inside. As she spoke to them, the other young women came outside, saying that H.A. was “off her medication, that she was having an episode, and that she would be okay,” Seattle Police Detective Tammie Case wrote in an incident report.

The others forced H.A. into Burt’s white Mercedes, telling the women who had stopped to help that they were taking her to a hospital. Instead, Burt drove them to the Emerald Motel on Aurora Avenue, where they had been previously trafficked, the charging papers said. Burt sent the others into the motel while H.A., still wearing only her underwear, remained in the vehicle with him.

He told her he that would let her leave, but that he would knock her teeth out first, the prosecutor wrote. She escaped from the car and ran across a six-lane highway, trying to get help. Several motorists called 911, but no one stopped. To avoid being forced back into Burt’s car, she sat on the highway.

“H.A. felt safer in the middle of a busy highway, practically naked, at night than being within arm’s reach of the defendant,” Gauen wrote. “Surveillance video from a nearby business has corroborated H.A.’s account of what happened.”

The ride-share driver stopped and told H.A. to get in his van. Burt pursued them, shooting at the van, Gauen wrote. The ride-share driver was also armed and fired back over several blocks until he was able to get onto Interstate 5 and meet police at a gas station. No one appears to have been struck by the bullets, but the van’s windshield was riddled with holes.

Police arrested Burt as he was leaving the rental home with the other women, the documents said. He faces charges that include human trafficking, promoting prostitution, assault and drive-by shooting, but given the “expansive reach of the defendant’s egregious behavior,” additional charges are likely, Gauen wrote.

Prosecutors are also concerned about case tampering; one woman who continues to work for Burt has already been reaching out to H.A. in an attempt to learn her location and persuade her to return, Gauen wrote.