VALDOSTA, Ga. (AP) — A Georgia sheriff who last year reopened an investigation into the 2013 death of a teenager found inside a rolled-up gym mat at school concluded there was no evidence of foul play after reviewing voluminous evidence collected by federal investigators.

Classmates at Lowndes High School in Valdosta found 17-year-old Kendrick Johnson’s body on Jan. 11, 2013. Sheriff’s investigators decided soon after that Johnson died in a freak accident, stuck upside down and unable to breathe while trying to retrieve a shoe that fell inside the upright mat.

Johnson’s parents have long insisted that someone killed him, and that school officials and law enforcement covered up the crime. 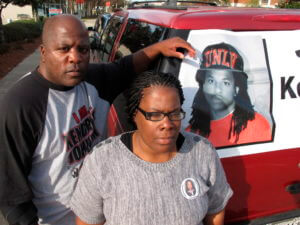 FILE – Kenneth and Jacquelyn Johnson stand next to a banner on their SUV showing their late son, Kendrick Johnson, on Dec. 13, 2013, in Valdosta, Ga. A Georgia sheriff who last year reopened an investigation into the 2013 death of Kendrick Johnson, a teenager found inside a rolled up gym mat at school, concluded, Wednesday, Jan. 26, 2022, there was no evidence of foul play after reviewing voluminous evidence collected by federal investigators. (AP Photo/Russ Bynum, File)

Lowndes County Sheriff Ashley Paulk, who wasn’t in office when Johnson’s death was first investigated, agreed to take a new look last March after the teenager’s parents helped him obtain the Department of Justice’s case file on the death. Evidence in the file filled 17 boxes.

In a written report released Wednesday, Paulk said all of the physical evidence, interviews and grand jury testimony “does not produce anything to prove any criminal act by anyone that would have resulted in the death of Kendrick Johnson.”

The sheriff also bluntly dismissed allegations of a cover-up, saying: “Any person who looks at this case objectively would know that it would be impossible to conceal any evidence due to the involvement of so many agencies and investigators.”

Federal authorities revealed little information on their findings in 2016 when they closed their investigation into Johnson’s death. The Justice Department released a statement at the time saying investigators “found insufficient evidence to support federal criminal charges.”

“You didn’t find nothing in 17 boxes? That’s the craziest lie you could have told,” she told WSB-TV. “We already knew what team you were on. You are not on the team of righteousness.”