WASHINGTON (AP) — The son of a Texas man charged with storming the U.S. Capitol with a holstered gun testified Thursday that he secretly recorded his father proudly describing his role in the riot and gave the audio file to an FBI agent after his father, a militia member, threatened him and his sister.

Jackson Reffitt, then 18, said he was terrified and “pretty grossed out” when his father, Guy Wesley Reffitt, told him and his 16-year-old sister that they would be “traitors” if they reported him to law enforcement after the Capitol attack on Jan. 6, 2021. And he told his children that “traitors get shot,” Jackson Reffitt recalled. 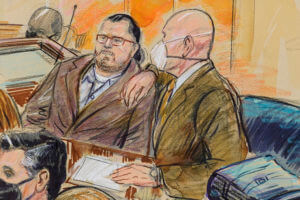 This artist sketch depicts Guy Wesley Reffitt, joined by his lawyer William Welch, right, in Federal Court, in Washington, Monday, Feb. 28, 2022. Reffitt, a Texas man charged with storming the U.S. Capitol with a holstered handgun on his waist, is the first Jan. 6 defendant to go on trial. (Dana Verkouteren/San Francisco Chronicle via AP)

“I never thought our father would say that to us,” Jackson Reffitt said on the second day of his father’s trial — the first for any of the hundreds of people charged in the riot.

Jackson Reffitt, a prosecution witness, said he felt a mix of fear and guilt after he met with an FBI agent five days after the riot. He said he told the agent about his father’s threats earlier that day. He also turned over a cellphone recording of a family conversation at their home in Wylie, Texas, near Dallas.

“I don’t regret it,” he said in a quavering voice. “I don’t have words to really describe it.”

Guy Reffitt broke down in tears when prosecutors called his son to the stand, wiping his eyes as his face turned red, according to a pool reporter in the courtroom.

Guy Reffitt, 49, is charged with bringing a gun onto Capitol grounds and interfering with police officers guarding the building. He also is charged with obstructing justice for the alleged threats against his children.

Jackson Reffitt initially contacted the FBI on Christmas Eve, less than two weeks before the Capitol riot, to report concerns about his father’s behavior and increasingly worrisome rhetoric.

For months, Guy Reffitt had spoke repeatedly about doing “something big,” his son recalled. In late December, he told his son he was going to Washington.

“What’s about to happen will shock the world,” Reffitt said in a text message to his son on Christmas Eve.

“We are about to rise up the way the Constitution was written,” he wrote in another text.

Jackson Reffitt said he sent a tip about his father through the FBI’s website that day but didn’t get a response until Jan. 6. He said he didn’t know his father had gone to Washington until after the riot erupted.

On his way home to Texas, Guy Reffitt sent his family a link to a video clip from the Fox News website that showed him at the Capitol during the riot.

“It was sarcasm,” Jackson Reffitt explained during his trial testimony.

The younger of Guy Reffitt’s two daughters, Peyton, also is listed as a government witness for her father’s trial. Prosecutors say they expect her to testify that she believed her father was trying to intimidate her and her brother so they wouldn’t contact authorities.

Assistant U.S. Attorney Jeffrey Nestler told jurors that Reffitt drove from Texas to Washington because he intended to storm the Capitol and try to stop Congress from certifying President Joe Biden’s electoral victory. Reffitt “lit the match that started the fire” when a mob charged at police officers guarding the building and was “the tip of this mob’s spear,” Nestler said.

Defense attorney William Welch said the Justice Department’s case against Reffitt is based on “a lot of hype” and a “rush to judgment” against a man who is prone to bragging, exaggerating and ranting. Welch disputed that Reffit had a gun at the Capitol and said there is no evidence that Reffitt damaged property, used force or physically harmed anybody.

Reffitt’s trial could be a bellwether. A conviction would give prosecutors more leverage to cut plea deals with others facing the most serious charges. An acquittal could embolden other riot defendants to seek more favorable plea terms or gamble on trials of their own.

Reffitt was arrested in Texas less than a week after the riot and has remained jailed in Washington.

On Jan. 6, Reffitt was armed with a holstered handgun, carrying zip-tie handcuffs and wearing body armor and a helmet adorned with a video camera when he and other rioters charged at police officers on the west side of the Capitol, according to prosecutors. Before they advanced, Reffitt used a megaphone to shout at police to step aside and to urge the mob to push forward and overtake officers, Nestler said.

Reffitt wasn’t one of the hundreds of rioters who entered the building. He retreated after an officer pepper-sprayed him in the face.

Reffitt is a member of the “Texas Three Percenters,” a militia-style group, according to prosecutors. The Three Percenters militia movement refers to the myth that only 3% of American colonists fought against the British in the Revolutionary War.

Jurors saw a recording of a Zoom meeting that Reffitt had with another militia member after the riot. Referring to conversations he had at then-President Donald Trump’s “Stop the Steal” rally before the riot erupted, Reffitt recalled saying: “Well, I’m not done until we drag them out screaming and kicking. I don’t care if (House Speaker Nancy) Pelosi’s head is hitting every step while I drag her by her ankles. She’s coming out.”