A blistering report on the Southern Baptist Convention’s mishandling of sex abuse allegations is raising the prospect that the denomination, for the first time, will create a publicly accessible database of pastors and other church personnel known to be abusers.

The creation of an “Offender Information System” was one of the key recommendations in a report released Sunday by Guidepost Solutions, an independent firm contracted by the SBC’s Executive Committee after delegates to last year’s national meeting pressed for an investigation by outsiders. 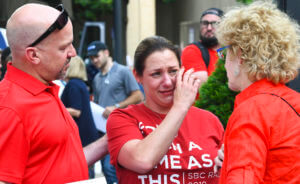 FILE – In this Tuesday, June 11, 2019 file photo, Jules Woodson, center, of Colorado Springs, Colo., is comforted by her boyfriend Ben Smith, left, and Christa Brown during a demonstration outside the Southern Baptist Convention’s annual meeting in Birmingham, Ala. First-time attendee Woodson spoke through tears as she described being abused sexually by a Southern Baptist minister. A blistering report on the Southern Baptist Convention’s mishandling of sex abuse allegations, released on Sunday, May 23, 2022, is raising the prospect that the denomination, for the first time, will create a publicly accessible database of pastors and other church personnel known to be abusers. (AP Photo/Julie Bennett, File)

The proposed database is expected to be one of several recommendations presented to thousands of delegates attending this year’s national meeting, scheduled for June 14-15 in Anaheim, California.

“Those recommendations will be open to questions, debate and comments on the meeting floor,” said SBC President Ed Litton.

He expressed hope that the shocking findings in the Guidepost report will bring “lasting change” to the SBC, America’s largest Protestant denomination. It has been losing membership steadily in recent years, while being wracked by internal divisions over race and gender roles.

The Guidepost report said survivors of abuse by SBC clergy repeatedly shared allegations with the Executive Committee, “only to be met, time and time again, with resistance, stonewalling, and even outright hostility from some within the EC.”

“Our investigation revealed that, for many years, a few senior EC leaders, along with outside counsel, largely controlled the EC’s response to these reports of abuse … and were singularly focused on avoiding liability,” the report said.

The motion for an independent investigation was put forward at last year’s national meeting by the Rev. Grant Gaines, senior pastor of Belle Aire Baptist Church in Murfreesboro, Tennessee.

Reading the Guidepost report, Gaines said he was struck by repeated examples of a callous disregard for survivors, as well as leaders prioritizing protection of the SBC from liability over abuse prevention. 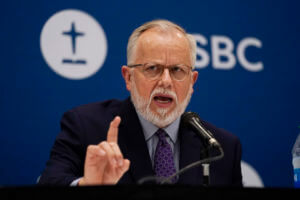 FILE – Pastor Ed Litton, of Saraland, Ala., answers questions after being elected president of the Southern Baptist Convention Tuesday, June 15, 2021, in Nashville, Tenn. A blistering report on the Southern Baptist Convention’s mishandling of sex abuse allegations, released on Sunday, May 23, 2022, is raising the prospect that the denomination, for the first time, will create a publicly accessible database of pastors and other church personnel known to be abusers. Litton expressed hope that the shocking findings in the Guidepost report will bring “lasting change” to the SBC. (AP Photo/Mark Humphrey, File)

“We’re at a fork in the road,” Gaines said. “I think this report provided the information that we needed for there to be a groundswell of support to take the right actions.”

Specifically, Gaines said he supports the proposal to create a system that alerts communities to known offenders.

“I think that’s one of the first things we should do,” he said.

Lawyer and writer Christa Brown, who says she was sexually abused as a teen by the youth minister at her SBC church, has been pressing the SBC since 2006 to create a publicly accessible database of known abusers. She was heartened that Guidepost was recommending such a system, but said questions remain about its implementation.

“What is absolutely critical is that the local church cannot function as the default or presumed starting place for a survivor to try to obtain an investigation of clergy sex abuse,” she said via email. “If the local church is deemed to be a requisite first stop for survivors to pursue action, then many survivors’ voices will be choked in their throats before sound is ever uttered.”

The final decisions about recommendations to submit to the Anaheim delegates will be made by the SBC’s Sexual Abuse Task Force, comprising seven members and two advisors. Its work over the past year has been an emotional journey, said Pastor Bruce Frank, who led the group.

“We saw patterns and things that were deeply concerning,” he said. “Our main job was to empower Guidepost to do their job, and they have done a truly remarkable job in the last nine months to look at events that occurred over 20 years.”

In the next week or so, the task force will bring forth formal motions in “precise language,” which will be made public and presented to the delegates in Anaheim for a vote, said Frank, lead pastor of Biltmore Baptist Church in Arden, North Carolina.

Frank said the crux of the task force’s recommendations based on Guidepost’s report can be summarized in two words – prevention and care.

“Our main goal should be preventing sexual abuse,” he said. “And if abuse does occur, how do we care for survivors in a much better pastoral way? How can we better communicate to make sure (abusers) don’t go from one church to another?”

His hope is that this report serves as “a catalyst for change.”

“Any person who is fair-minded will look at what’s in that report and demand that things be better,” Frank said. “SBC is a big family with 48,000 churches. There might be some disagreement on how to make things better. But I’m confident that we’ll work through the difficulties.”

In addition to sex abuse, the agenda for the meeting in Anaheim includes election of a new SBC president to succeed Litton.

One of the leading contenders is Bart Barber, a pastor from Farmersville, Texas, who expressed dismay at the mean-spirited behaviors attributed to some SBC officials in the Guidepost report.

If elected, Barber said in a broadcast interview Monday, “I’m praying that God will give me the wisdom to know what to do…. We’re sailing into uncharted waters.”

“The work’s not done,” he added. “We’ve gotten the report, but I think everybody in the survivor community that I’ve heard from has said reports are one thing, but we’ll see if this family of churches has the courage and resolve to take action.”

The sex abuse scandal was thrust into the spotlight in 2019 by a landmark report from the Houston Chronicle and San Antonio Express-News documenting hundreds of cases in Southern Baptist churches, including several in which alleged perpetrators remained in ministry.
___
Associated Press religion coverage receives support through the AP’s collaboration with The Conversation US, with funding from Lilly Endowment Inc. The AP is solely responsible for this content.