OMAHA, Neb. (AP) — A Nebraska state senator called for a criminal investigation after one of her colleagues said he would resign after admitting that he took photos of a female legislative aide without her knowledge.

Democratic state Sen. Megan Hunt of Omaha sent a letter urging the state attorney general and Nebraska State Patrol to investigate the conduct of Republican Sen. Mike Groene to determine if he committed any crimes, according to the Omaha World-Herald. 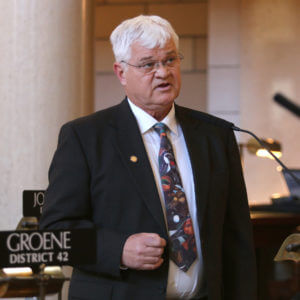 Groene told The Associated Press Friday that he planned to resign this week to avoid putting his family through a public ordeal. The conservative from North Platte who often disagreed with his Democratic colleagues in the Legislature also said he would withdraw from the race for the University of Nebraska Board of Regents and leave politics.

Groene announced he would resign after an online news outlet, Nebraska Sunrise News, reported that one of his staffers had filed a complaint after she discovered the photos on Groene’s laptop, which he had given her to complete a project.

The staffer who was photographed, Kristina Konecko, told the World-Herald that one detail in the initial stories about her complaint was incorrect. She said that she didn’t find any evidence that the photos had been sent to anyone else.

But Konecko did say that some of the photos were close-ups of parts of her body with sexually suggestive captions.

The Associated Press does not typically name victims of sexual harassment, but did so in this case because the newspaper said it published Konecko’s name at her request.

Groene said he took photos of the staffer, but he described them as harmless images of staffers, visitors and family members in his office. He also denied that any of them were sexual in nature or that focused on particular body parts.

Konecko told the newspaper that she filed her complaint under the Legislature’s workplace harassment policy in early February, and she has since transferred to another legislative office. She said no one ordered her not to discuss the issue, but she doesn’t plan to answer additional questions about it now that it may be investigated.

“I have not been advised or directed nor have I received any suggestions or recommendations from any outside sources, but because there has been a call for a formal investigation, I am not going to be answering any questions or sharing any further information,” she said. “However, I am very grateful and appreciative for the outpouring of support and encouragement that I have received from the public.”

Groene said he apologized to the staffer after she confronted him about the photos a few weeks ago and believed the matter was over.

Under the Legislature’s policy, formal complaints about senators or staffers are filed with the Legislature’s Executive Board, but they’re not released to the public unless the committee finds serious misconduct.

During his time in the Legislature Groene fought to lower property taxes and sometimes used abrasive language during floor debate. He also led the Legislature’s Education Committee for four years before his colleagues voted to replace him with a Democratic state senator.

Groene, 66, was scheduled to leave the Legislature next year due to term limits.