After hearing testimony from the defendant himself, jurors heard final perspective from each side before the case was handed over to them for deliberation.

Yust is accused of murdering Kara Kopetsky, 17, and Jessica Runions, 21. Kopetsky was last seen in May 2007. Runions was last seen leaving a party with Yust in September 2016. Their remains were reportedly found in a wooded area near each other in 2017.

The prosecution was up first, and assistant prosecuting attorney Julie Tolle appealed to the jurors’ reason and common sense.

She also took them through one of the documents they will use to make their verdict, which for first-degree murder, require some amount of deliberation, “no matter how brief.”

She closed her arguments for the day by putting a timer on the screen in the courtroom.

It was set to the amount of time it takes to strangle a person to death.

Tolle asked the jurors to think about Yust’s alleged victims, Kara Kopetsky and Jessica Runions, as the clock ticked down.

“Those two girls didn’t know each other in life, but they will be united forever together in death,” Tolle said.

The defense, however, argued there is not enough hard evidence to prove beyond a reasonable doubt that Yust committed the crimes of which he’s accused. 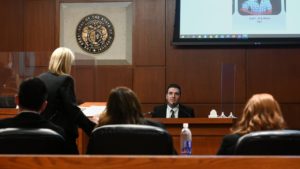 With a family photo projected, defense attorney Sharon Turlington, standing, questions Kylr Yust as Yust testifies on the ninth day of his murder trial at the Cass County Justice Center Wednesday, April 14, 2021. Yust is charged with two counts of first-degree murder in the deaths of Kara Kopetsky, 17, and Jessica Runions, 21. The prosecuting attorneys, seated, listen to testimony in the foreground. Jill Toyoshiba/Pool via KSHB)

“Talk is cheap, and sometimes words don’t mean anything,” defense attorney Sharon Turlington said, talking about alleged confessions her client made to friends. “What does the evidence say in this case — the science?”

She asked the jury if it was reasonable to believe Yust pulled off two murders without a trace of physical evidence.

Turlington also ridiculed the timeline presented by the state, though the state had another opportunity in front of the jury to show how it would have worked.

The case was handed over to the jury just before 6 p.m. Wednesday.

This story was originally published April 14, 2021, by Hailey Godburn of KSHB in Kansas City. For KSHB’s complete coverage of the trial of Kylr Yust, visit kshb.com/yusttrial.