WASHINGTON (AP) — The Supreme Court ruled along ideological lines Monday against two Arizona death row inmates who had argued that their lawyers did a poor job representing them in state court. The ruling will make it harder for certain inmates sentenced to death or long terms in prison who believe their lawyers failed them to bring challenges on those grounds.

The ruling involves cases brought to federal court after state court review. Justice Clarence Thomas wrote for the court’s six-justice conservative majority that the proper role for federal courts in these cases is a limited one and that federal courts are generally barred from taking in new evidence of ineffective assistance of counsel that could help prisoners. He wrote that “federal courts must afford unwavering respect to the centrality” of state criminal trials. 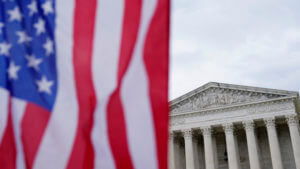 In a dissent, Justice Sonia Sotomayor called her colleagues’ decision “perverse” and “illogical.” She said it “hamstrings the federal courts’ authority to safeguard” a defendant’s right to an effective lawyer, a right guaranteed by the Constitution’s Sixth Amendment.

Sotomayor said the decision will “will leave many people who were convicted in violation of the Sixth Amendment to face incarceration or even execution without any meaningful chance to vindicate their right to counsel.”

Sotomayor was joined by fellow liberals Elena Kagan and Stephen Breyer, who is retiring this summer.

The case before the court involved Barry Lee Jones, who was convicted in the death of his girlfriend’s 4-year-old daughter, who died after a beating ruptured her small intestine. It also involved David Martinez Ramirez, who was convicted of using scissors to fatally stab his girlfriend in the neck and fatally stabbing her 15-year-old daughter with a box cutter.

In both cases the men argued they were failed by lawyers who handled their initial state court trials and then by lawyers, called postconviction counsel, that handled a state review of their cases after appeals failed. The postconviction lawyers allegedly erred by not arguing the trial counsel was ineffective. The men then took their cases to federal court.

A Supreme Court ruling from 2012 opened an avenue for prisoners to make ineffective assistance of counsel claims in federal court. But on Monday the court said the federal Antiterrorism and Effective Death Penalty Act bars federal courts from developing new evidence related to the ineffectiveness of the postconviction lawyers. Sotomayor and an attorney for Jones and Lee said the decision takes out the “guts” of the earlier ruling.

In Jones’ case a federal court judge ordered him released or retried after finding lawyers failed first by not presenting evidence he was innocent and then, after his appeals failed, neglecting to argue his lawyer was ineffective. The Supreme Court’s decision reinstates his conviction, his lawyers said.

Ramirez, for his part, argued his trial lawyer failed to investigate or present evidence he has an intellectual disability and experienced severe physical abuse and neglect. A lawyer he was assigned after appeals failed didn’t raise an ineffective assistance of counsel claim.

Ramirez argued presenting that evidence should have ruled out the death penalty. The high court’s decision means he won’t get that chance, his lawyers said.

In a statement, Arizona Attorney General Brnovich praised the ruling.

“I applaud the Supreme Court’s decision because it will help refocus society on achieving justice for victims, instead of on endless delays that allow convicted killers to dodge accountability for their heinous crimes,” he said.

But Robert Loeb, who argued Jones and Ramirez’ case at the high court, called it a “sad day.” The ruling “leaves the fundamental constitutional right to trial counsel with no effective mechanism for enforcement in these circumstances,” Loeb said in a statement.