WASHINGTON (AP) — The Supreme Court will tackle a dispute between public school officials and a former high school football coach who wanted to kneel and pray on the field after games.

The case before the justices on Monday involves Joseph Kennedy, a former football coach at Bremerton High School in Bremerton, Washington. For years, the coach would kneel at the center of the field following games and lead students in prayer. The school district eventually learned what he was doing and asked him to stop. 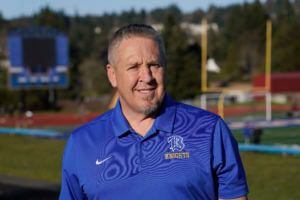 Joe Kennedy, a former assistant football coach at Bremerton High School in Bremerton, Wash., poses for a photo March 9, 2022, at the school’s football field. After losing his coaching job for refusing to stop kneeling in prayer with players and spectators on the field immediately after football games, Kennedy will take his arguments before the U.S. Supreme Court on Monday, April 25, 2022, saying the Bremerton School District violated his First Amendment rights by refusing to let him continue praying at midfield after games. (AP Photo/Ted S. Warren)

Kennedy’s lawyers say the Constitution’s freedom of speech and freedom of religion guarantees allow him to pray on the field, with students free to join. But the school district says Kennedy’s religious speech interfered with students’ own religious freedom rights, could have the effect of pressuring students to pray and opened the district itself to lawsuits. The school district says it tried to work out a solution so Kennedy, who is Christian, could pray privately before or after the game, including on the field after students left, but Kennedy’s lawsuit followed.

The case comes to the court at a time when conservative justices make up a majority of the court and have been sympathetic to the concerns of religious individuals and groups, such as groups that brought challenges to coronavirus restrictions that applied to houses of worship.

But cases involving religion can also unite the court. Last year, for example, the court unanimously sided with a Catholic foster care agency that said its religious views prevent it from working with same-sex couples. Already this term in an 8-1 decision the justices ruled for a Texas death row inmate who sought to have his pastor pray aloud and touch him while his execution was carried out.

The case from Bremerton, meanwhile, has already caught the justices’ attention. In 2019 the justices declined to get involved in the case at an earlier stage. But four justices were critical of lower court rulings for the school district, writing that an appeals court’s “understanding of the free speech rights of public school teachers is troubling.”

Kennedy started working at Bremerton High School in 2008, and it was his practice at the end of games — after the players and coaches from both teams would meet at midfield to shake hands — to pause and kneel to pray. Kennedy said he wanted to give thanks for what his players had accomplished and for their safety, among other things.

Kennedy initially prayed alone on the 50-yard line at the end of games, but students started joining him and over time he began to deliver a short, inspirational talk with religious references. Kennedy says he never required players to join or asked any student to pray. He also led the team in prayer in the locker room before games, a practice that predated him.

The school district didn’t learn of Kennedy’s practice until 2015. It told him then that he needed to stop praying with students or engaging in overtly religious activity while still “on duty” as a coach. After Kennedy continued to pray on the field, he was placed on paid leave. His contract expired and he didn’t reapply to coach the following year, the school says.

A decision is expected before the court begins its summer recess.