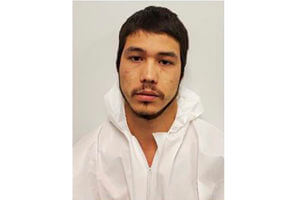 SALT LAKE CITY (AP) — Relatives of a Utah woman who police say was killed last weekend after meeting a man via the popular dating app Tinder have called the suspect a “monster” who took their daughter in “a crime as senseless as it was evil.”

The family of Ashlyn Black issued the comments Monday night in a statement, a day after police say she was choked and stabbed to death inside the suspect’s home in Layton, Utah.

“A monster has taken away the life of our little girl in a crime as senseless as it was evil. Our hearts are broken and our lives are forever changed due to the despicable acts of another person,” the family said.

Black, 25, was a “fun-loving” woman with a passion for “being the voice of those who could not speak out for themselves” and a gift for working with special needs people, the family said.

“The lives of her friends and family are permanently altered,” the statement said. “No time can fill the emptiness we feel, and the hole it has left in our hearts.”

Ethan Hunsaker, 24, was arrested Sunday on suspicion of murder and is being held without bail. He had not yet been charged. Court documents do not indicate if he was being represented by a lawyer who could speak on his behalf. No listed phone number could be found for Hunsaker.

Layton Police say the motive is still under investigation, but that the attack appeared to be unprovoked.

The two met for drinks Saturday night after meeting on the dating app and then went to Hunsaker’s house in Layton, a city of 78,000 people about 25 miles (40 kilometers) north of Salt Lake City, according to a probable cause statement filed by police.

Police said they found Black lying on the floor with multiple stab wounds. Emergency workers tried to resuscitate her, but she died of her injuries at the scene.

Hunsaker told police he had thoughts of killing himself and others daily. He has been diagnosed with an unspecified mental illness, police said in the document.