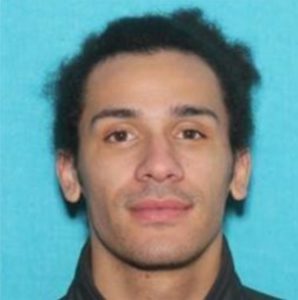 PORTLAND, Ore. (AP) — Police in Portland, Oregon on Tuesday said they have identified a suspect accused of punching and kicking a man to the ground after he crashed his pickup truck on a sidewalk near ongoing demonstrations.

Authorities had received a report around 10:30 p.m. Sunday of protesters chasing a truck a few blocks from the downtown federal courthouse. The driver crashed and was then assaulted, authorities said.

Authorities are trying to track down the suspect, Marquise Love, 25, police said in a statement. The victim of the assault has been released from a hospital and is recovering, the statement said.

Video posted online showed the driver of the truck sitting in the street next to the vehicle. A crowd gathered around him and repeatedly punched and kicked him in the head until he was bloody. It wasn’t immediately clear what led to the crash or the confrontation.

When police arrived the man was unconscious.

A social media account apparently connected to Love has been disabled and efforts to locate him for comment were not immediately successful.

On Monday night, authorities said people marched to the police union building and tried to break into the facility.

The KOIN television station reported that a hose was placed in the window of the building in an an attempt to flood it. The amount of damage resulting from the water is unknown.

The Portland Police Association building has been the target of multiple arson fires and substantial graffiti by people involved in the protests.

No arrests were made during Monday night’s protest and authorities said most of the crowd dispersed by early Tuesday morning.