NEW IBERIA, La. (AP) — Court is in session in a southwest Louisiana parish, but the attorneys, judges, and defendants are all teenagers.

A New Iberia family pushed for teen court in the city after losing their 17-year-old son to gun violence. The family of Garon Lewis started the Garon Paul Atkinson Lewis Foundation soon after he was shot and killed in New Iberia in 2019. One of their goals: bring teen court back to the city.

It’s a real juvenile justice system where teens charged with misdemeanors in Iberia Parish are sentenced by a jury of teenage peers. 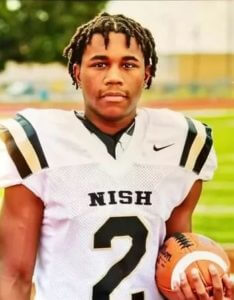 17-year-old Garon Lewis, pictured here, was lost to gun violence in 2019. His family started the Garon Paul Atkinson Lewis Foundation in his honor.

“It actually is fitting. A crime is the thing that brought us here, and now we’re trying to do something to prevent that from happening again,” said Tytiana McWhorter, the program coordinator of teen court.

“It’s real court. The charges are real. The court session is real. The sentencing is real,” Executive Director of the foundation Tyra McWhorter said.
Teens aged 12 to 18, facing misdemeanor charges, come to be judged by people their own age.

“They get in a little trouble, and they come here. The youth are the judges, the attorneys, and the jurors, so they get to hear from their own. They’re being judged by their youth,” Tyra McWhorter said.

Those youth do some heavy preparation to get ready for their roles, learning how the justice system works. Carson Mallet, 12, said he spoke to former judges and read books about court to get ready for his job as a teen defense attorney and prosecutor.

“I was always interested in the court. My dad was a cop. It’s always been in my life, and I’ve always shown interest. So why not go for it when you get the chance?” Mallet said.

He said they’re given real cases and come up with their own questions and opening and closing statements. Once the cases are presented, they can administer sentences that include community service hours, curfews, probation, and apology letters.

“It’s going to teach them their self-worth, how to deal if you get in trouble, things that happen. We want them to learn you might get in trouble, but there’s a way that you can bounce back and get back on track. We don’t want them thinking because you’re in trouble, you’re the worst ever. This is a chance for them to come, learn, and do better,” McWhorter said.

So far, 75 teens are currently participating in the program.