CONCORD, N.H. (AP) — A 2019 collision that killed seven members of a Marine motorcycle club would’ve happened even if the truck was in the middle of its lane because the lead biker was “headed in that direction,” a crash reconstruction expert said Monday on the final day of testimony in the truck driver’s trial.

Closing arguments are set for Tuesday in the trial of Volodymyr Zhukovskyy, 26, who faces negligent homicide, manslaughter and reckless conduct charges in connection with the June 21, 2019, crash in Randolph, New Hampshire. 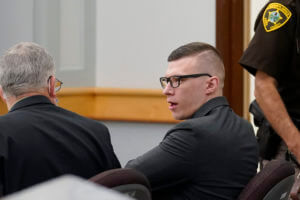 Prosecutors have argued that Zhukovskyy, who had taken heroin, fentanyl and cocaine that day, repeatedly swerved back and forth before the head-on crash and told police he caused it. But a judge dismissed eight charges related to whether he was impaired, and his attorney blames the lead biker, Albert “Woody” Mazza, saying he lost control of his motorcycle and collided with the truck while driving drunk.

Testifying for the defense, William Howerton of Scientific Boston, Inc., was asked where the collision between Mazza’s motorcycle and Zhukovskyy’s truck occurred.

Howerton also said that based on his analysis, the truck was aligned with the road while the motorcycle was angled toward the center line just before impact. Asked if the crash would’ve happened had the truck been in the middle of its lane, he said, “ If the truck was in the middle of its lane, would the crash still have happened, he said, “Yes. The motorcycle was headed in that direction.”

The motorcyclists who died were members of the Jarheads Motorcycle Club from New Hampshire, Massachusetts and Rhode Island and ranged in age from 42 to 62. They were part of a larger group that had just left a motel along the highway and were headed to an American Legion Post in Gorham for a fundraiser.