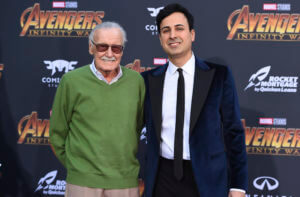 FILE – Stan Lee, left, and Keya Morgan arrive at the world premiere of “Avengers: Infinity War” on April 23, 2018, in Los Angeles. A Los Angeles judge declared a mistrial and dismissed grand theft charges Tuesday, Nov. 1, 2022, against Morgan, a former business manager of Marvel Comics mastermind Lee. Superior Court Judge George Lomeli dismissed the charges against Morgan, who was accused of stealing from Lee, when a jury was deadlocked 11-1 in favor of acquittal after two days of deliberations and a 2 1/2-week trial. (Photo by Jordan Strauss/Invision/AP, File)

Superior Court Judge George Lomeli dismissed the charges against Keya Morgan, who was accused of stealing from Lee, when a jury was deadlocked 11-1 in favor of acquittal after two days of deliberations and a 2 1/2-week trial.

Lomeli said he was stepping in to clear Morgan of three felony counts of grand theft from an elder “in the interests of justice,” according to Variety.

“My client and I have spent four years proving his innocence and today we prevailed,” Morgan’s attorney Alex Kessel said in an email to The Associated Press.

Prosecutors had alleged that Morgan, 41, stole more than $220,000 in proceeds from three memorabilia signings from Lee about six months before Lee died in 2018. Morgan was arrested the following year. Initial charges of elder abuse and false imprisonment against Morgan were dropped long before the trial.

The prosecution argued during the trial that Morgan had preyed on Lee when Lee was in mental decline in the last months of his life, and acted without authority on his behalf.

Kessel argued that the missing money actually went to Lee’s daughter and heir J.C. Lee, who was a witness during the trial.

The proceedings were largely overshadowed by the simultaneous trials of disgraced movie mogul Harvey Weinstein and actor Danny Masterson, which were going on simultaneously with Morgan’s on the same hallway of a downtown LA courthouse.

Lee, the creative dynamo who co-created characters including Spider-Man, the Fantastic Four and the Incredible Hulk for Marvel and made beloved cameos in the movies that featured his creations, died in November of 2018 at age 95.