PUTNAM COUNTY (WRTV) — A New York man heading to Indianapolis in a tractor-trailer was arrested Sunday during a traffic stop on Interstate 70 after an Indiana State Police trooper found about 115 pounds of cocaine in his truck. Vikram Sandhu, 32, of Queens, New York, was arrested and charged with felony counts of dealing narcotics and cocaine possession, a news release from ISP said. He is being held at the Putnam County Jail.

An Indiana State Police trooper stopped Sandhu’s tractor-trailer for a motor carrier inspection around 5:45 p.m. Sunday near the 41 mile marker on I-70. 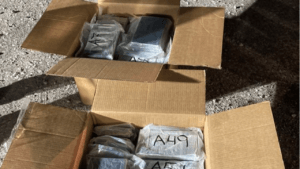 The Putnam County Sheriff’s Department K-9 was called in during the stop, and the truck was searched after the dog indicated it smelled drugs. The trooper found about $2 million worth of cocaine in the sleeper berth.

Sandhu was traveling from Houston to Indianapolis.

This story was originally published January 10, 2022, by WRTV in Indianapolis, an E.W. Scripps Company.