Velasquez was arrested Monday after he chased a pickup carrying Harry Goularte through busy streets in three Silicon Valley cities, ramming the vehicle with his own pickup truck during an 11-mile (18-kilometer) high-speed chase, prosecutors said. 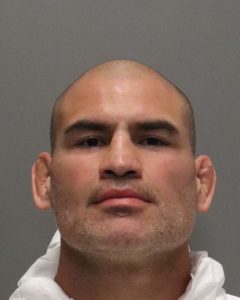 This photo provided by the San Jose Police Department shows former UFC heavyweight champion Cain Velasquez. Police say Velasquez was arrested on suspicion of attempted murder after a shooting that injured a man in Northern California. Velasquez was arrested Monday, Feb. 28, 2022, in San Jose and records show he is being held without bail at Santa Clara County Main Jail. (San Jose Police Department)

Velasquez fired a .40-caliber pistol at the vehicle several times, wounding Goularte’s stepfather, who was driving, in his arm and torso, prosecutors said.

Velasquez, 39, appeared in court Wednesday but his arraignment was postponed until Monday. He is being held without bail at Santa Clara County Main Jail.

About 100 people wearing T-shirts that read “Free Cain” showed up at the courthouse to show their support.

Last week, deputies were called to a San Marin daycare owned by Goularte’s mother regarding allegations of sexual assault involving a child, the Santa Clara County Sheriff’s Office said in a statement Wednesday.

After interviewing the child and others, investigators determined that a sexual assault had taken place and Goularte, 43, was arrested soon after, the office said.

Prosecutors said Velasquez on Monday went to the Goularte family home, where the daycare is located, and followed the truck through Morgan Hill and into San Jose, where he wounded Goularte’s stepfather. Goularte’s mother was also in the vehicle.

“The sad tragedy is that Mr. Velasquez chose to take the law into his own hands, endangering the public and everyone in the truck,” Rosen said. “This act of violence also causes more pain and suffering to his family.”

The Santa Clara County Sheriff’s Office said investigators believe there are other victims from the daycare and are working with potential witnesses and victims.

Goularte, 43, was arraigned on felony molestation charges in Santa Clara County Superior Court on Friday and a judge released him from custody without bail over the district attorney’s objections, Rosen said.

The Associated Press could not immediately determine whether anyone could speak on Goularte’s behalf.

He was released under the conditions that he stay in home detention in Morgan Hill, stay 100 yards away from any child under 14, and wear an electronic monitoring bracelet.

Goularte was on his way to get the monitor when Velasquez attacked the family, Rosen said.